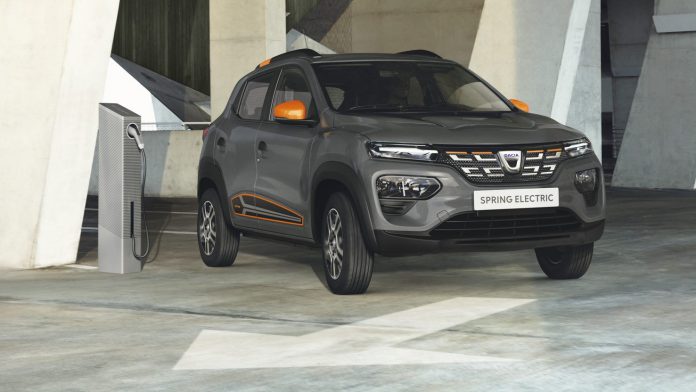 The series of discussions on sustainable mobility and related infrastructure opened on October 21, continued in a new edition of the Sustainable Mobility Forum event, on November 17, an edition dedicated to electric car manufacturers and suppliers of technology and alternative charging solutions. .

For the first time in Romania, in a 1: 1 interview, the representative of TRITIUM (world leader in EV DC fast chargers technology), Bruno MOEDIM – Sales Manager Europe, was present in a discussion related to the activity and plans of the TRITIUM company regarding to innovative solutions for DC charging stations.

The discussions were opened by Alexandru VESCU, Head of Electric Vehicles Sales Groupe Renault, who spoke about Dacia Spring, the first electric model of the Dacia brand, but also about the global vision of the Renault group, in terms of mobility. Alexandru Vescu answered the questions related to the technical characteristics of Dacia Spring, but also to those related to autonomy, charging methods and TCO.

According to the representative of Groupe Renault, Dacia Spring is a car with a very good autonomy in the city (295 km) and 220 km combined autonomy (urban and extra urban), it can be charged at domestic outlets or at 30 kw direct current stations , the costs generated by loading varying between 7 -10 lei / 100 km. The costs will be considerably lower than those of a conventional fuel car.

With the launch on the market, next spring, of a version dedicated to the car-sharing area, it is hoped that a change in the mentality of Romanian users, which will trigger a change in buying behavior, in favor of 100% electric vehicles .

Alexandru Vescu considers that “Dacia Spring will represent a revolution in the automotive world, it will become an emblematic model, and certainly the most accessible electric car on the Romanian market. The automotive industry must adapt to new changes, but it is certainly a thing: the road to electrification is irreversible “.

This is also clear from the strategy of the Renault group, which a month ago, when the Spring model was presented, together with the Megane e-Vision concept, presented an extensive electrification program (complete or partial) of all series models. .

In 2008, the Renault group presented the first electric concept, and since 2012, when it launched the first series models, Groupe Renault has sold over 180,000 ZOE units, the best-selling EV model in Europe. All the experience gained during these years is also found in the production of the Spring model, which was received by everyone with admiration and appreciation for the Dacia brand, which will now be represented in the electrical segment.

The conclusions of the discussions regarding Dacia Spring: it will be a car with a very good purchase price, which can be financed, will have very low running and overhaul costs, and will have a good residual value, so it has all the premises to have a better TCO, compared to a thermal vehicle.

The Renault Group will offer a complete eco-system for its buyers, starting from the wall box included in the car price, financing solutions and charging stations installed at dealers in the country, all part of a sustainable strategy to contribute to electrification , in order to have a cleaner planet and more breathable air.

Stefan POPESCU, Deputy Director for Public & Regulatory Affairs ENGIE Romania, changed the register of discussions, addressing current issues in the area of ​​alternative fuels and trends related to loading technologies, but also presented projects developed and implemented by ENGIE in the area of ​​sustainable mobility.

In his opinion, the pandemic period impacted the energy sector, energy consumption registering a significant decrease, which put pressure on gas volumes. The pandemic has been an accelerator of existing trends, such as connectivity, digitalization, the transition to electricity in the automotive industry, and has also accelerated the implementation of medium and long-term goals.

Regarding mobility, Stefan Popescu noticed a tendency towards the maturation of electric charging technology, to the detriment of the gas charging network. ENGIE Romania has installed on our territory a number of 140 power stations, and worldwide, ENGIE already has 100,000 units installed, aiming for 2025 to increase the network to 1 million stations. Romania is in the top 20 priority markets for ENGIE, and transport is one of the strategic axes. “We are expanding on the electricity side, but we want a mix, we must not neglect gas either, especially in winter, when hybrid solutions must be applied: gas-electric. Where there is a commitment for a fleet, ENGIE builds the gas station for free , the investment can amount to up to 1 million euros “.

In his opinion, Romania has lost the start in terms of compressed natural gas for vehicles, and ENGIE aims to “evangelize” among the authorities for this solution dedicated, in particular, to fleets and public transport (vans and garbage trucks). ).

Like the other guests at the talks, Stefan Popescu raised the issue of infrastructure, be it on CNG or electricity, as a priority in ensuring sustainable transport. Another important issue that must be considered is related to the technological gap between Romania and other countries, so it is important to develop all possible technologies, and for Romania the most viable and handy solutions are related to compressed natural gas and biomethane. .

Cristian MACEDONSCHI – President of the Smart City Brasov Association, spoke about the solutions that the Brasov authorities found in the direction of electrifying public transport, but also about how the COVID 19 pandemic changed people’s perception regarding public transport. Cristian Macedonschi considers that public transport will play a very important role, at the moment, globally, the concept of mobility and everything related to integrated eco-mobility is being rethought: bicycle lanes, scooters, carsharing, electric transport. “There are cities that offer free, multimodal, integrated public transportation, hubs where you can find alternative means of transportation that you can use throughout the trip.”

Cristian Macedonschi is of the opinion that mentalities have changed, people think more about the environment, and in terms of transport, it is intended to be a multimodal one, very well interconnected and digitized.

In the direction of a circular economy, he spoke about the projects of reconversion of the old buses, on Diesel, in electric buses, beneficial in the urban areas, because the particles PM2 and PM10 are reduced, and the air is purified.

Cristian Macedonschi concluded that soon Brasov will benefit from the much dreamed infrastructure, and thanks to the airport that will be operational next year, offering a great chance for Brasov to open its gates to the world.

Sebastian COCHINESCU – CEO and Founder Tailpath defined the concept of blockchain, and the benefits it brings in the energy field, and discussed two aspects related to the benefits that blockchain technology brings: for prosumers – they could benefit from a platform ” peer to peer “electricity trading – bringing up a relevant case in India, where consumers can buy energy 40% cheaper compared to the local market and secure information and microplates in multimodal urban mobility.

In the opinion of Oraan MARCULESCU, the pandemic slowed down the sales of electric cars, and the economic recovery after the lockdown period led to an increase in pollution at alarming rates. Other aspects reported by him, in terms of electromobility, referred to batteries, bonuses offered for the purchase of electric cars, but also to infrastructure, launching at the end of the discussions an appeal to the authorities, which, in his opinion, should prioritize infrastructure modernization, and direct much of the money that will come from the EU in this direction.

Remus Hirceaga – Partner Expense Reduction Analyst Europe (ERA), considers that Romania is “a paradise for electromobility”, a country that, in addition to polluting sources of energy production, is able to use at least 60% renewable energy. In this context, he also discussed the “break even point” of the electric car, which, in Romania, is better compared to other countries. Other topics addressed in the discussions were those related to how prosumers can influence the supply of electric cars, and what are the most important infrastructure challenges when we have on the streets of Romania, a large number of electric cars.

In conclusion, Remus Hirceaga considers that we must get involved in order to lobby on the biomass side, so Romania can benefit, without much effort, from a mix of renewable energy; we can have “at the pump” very cheap electricity, which is practically delivered by “mother-nature”. We need adequate, modern infrastructure, otherwise we have no chance.

Remus Hirceaga concluded by expressing his belief that he could have, without too much effort, an electrified and clean country, even independent, if local resources are well exploited, and called on the authorities to raise awareness, at fair value, of the importance electric mobility.

More details about the event can be found by accessing the event website: www.sustainable-mobility.eu

We thank the partners of this edition:

Supporting Partner: Together for a Better Tomorrow Association.

With experience in organizing private events, in 2016, Idea Events started organizing a series of public events generated by the most current international and national topics in terms of sustainability and sustainable development.

With each event organized, Idea Events promotes good practices, encourages creativity and facilitates the exchange of experience. All materials used in the events are made from recycled materials, and each action promotes an environmentally friendly approach.