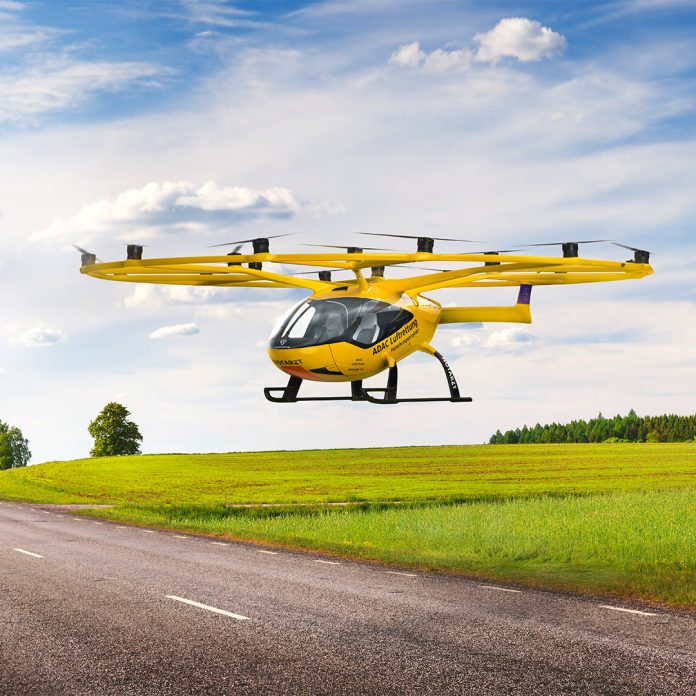 (ADAC Luftrettung gGmbH) ADAC Luftrettung is the first air rescue organisation in the world to test the use of manned multicopters in emergency medical services – both in theory and in practice. The charitable company from Munich has started a feasibility study for the groundbreaking pilot project, supported by the ADAC foundation. For this purpose, two model regions have been selected in Germany: the emergency service area of Ansbach with the Dinkelsbühl HEMS base in Bavaria, and the State of Rhineland Palatinate.

Starting in the spring of 2019, the Institut für Notfallmedizin und Medizinmanagement (INM, Institute for Emergency Medicine and Medical Management) at Ludwig Maximilian University in Munich will computer-simulate aeromedical missions using Volocopters for both regions. Volocopters, manufactured by the company of the same name in Bruchsal/Germany, are novel vertical take-off and landing craft which are based on drone technology and electric-powered. Within the framework of the pilot project, they will be specifically adapted for emergency services and used as air shuttles for emergency doctors. The object is to get the physician to the patient faster than rapid response vehicles can to provide better care.

Initial research flights will be carried out in just a few months’ time. The first results showing the potential usability and the cost-effectiveness of such aircraft in emergency medical services are planned for the autumn/winter of 2019.

“The Volocopter is based on a technical platform permitting its diverse and reliable use as an air taxi, heavy lifting drone, or in rescue missions,” says Florian Reuter, CEO of Volocopter. “I firmly believe in the Volocopter’s potential for large-scale use as an air shuttle for emergency doctors, and I look forward to our joint systematic validation with ADAC air rescue.”

Frédéric Bruder, Managing Director of ADAC air rescue, regards this study as the dawn of a new age in air rescue. “50 years ago, ADAC was among the first in Germany to field test the use of rescue helicopters. Consequently, it is only logical for us to be the first to lead German air rescue into the future with new technologies.”

Scheduled for 1.5 years, the feasibility study will cost approx. €500,000. The charitable ADAC foundation is supporting the study in connection with its funding priority of rescue in life-threatening situations. “Our goal in supporting this project is to improve emergency medical care, thereby making an important contribution to the future of the EMS system,” explains Dr Andrea David, Managing Director of the ADAC foundation. Scientific support for the project comes from the German Aerospace Center (DLR) with whom ADAC air rescue has already cooperated in research and development.

Volocopter is the global leader in the development of electrical vertical take-off and landing multicopters (eVTOL) as air taxis to fly people safely to their destination. The technical platform is extremely flexible and permits piloted, remote controlled, and fully autonomous flight. In addition, the unique design offers unprecedented degrees of safety based on the high level of redundancy in all critical components. As early as 2011 the company earned its entry into the history of aviation through the manned flight of the world’s first purely electrical multicopter. Since then, the young enterprise has set new milestones: in 2016 Volocopter obtained provisional licensing for a two-seater Volocopter from the German aviation authorities, and in 2017 the aviation start-up showcased the first ever autonomous flight of an urban air taxi in cooperation with RTA Dubai. In the meantime, the founders Stephan Wolf and Alexander Zosel have gathered an effective team of experienced managers like CEO Florian Reuter, CTO Jan-Hendrik Boelens, and CFO Rene Griemens. This has paved the way for the further expansion of the company. Daimler and Intel are among the investors in the company.

ADAC Luftrettung gGmbH
Operating more than 50 rescue helicopters out of 36 bases, the charitable ADAC air rescue service is one of the major HEMS organisations in Europe. Since 2017, the organisation has operated under the umbrella of the charitable ADAC foundation. The ADAC rescue helicopters are part of the German EMS system. If need be, they are requested by public-safety answering points after a 112 emergency call and deployed to rescue injured or ill persons. “Racing against time and for life” is the motto of ADAC Luftrettung gGmbH. One rule applies especially in the case of serious injuries or illness: the faster the patients are taken to an adequate hospital for treatment or attended to by an emergency doctor on site, the better are their chances of survival or convalescence.

The ADAC foundation
the charitable ADAC foundation promotes research and education to prevent accidents: scientific findings are meant to increase safety in road traffic and in non-professional motor sport. Moreover, the ADAC foundation works to raise awareness in children and teenagers of the dangers of road traffic. By promoting mobility research, the foundation contributes to furthering the sustainable development of road traffic. The foundation also provides relief for persons in need after an accident, helping to restore their mobility. Another funding priority is rescue in life-threatening situations by ADAC Luftrettung gGmbH.