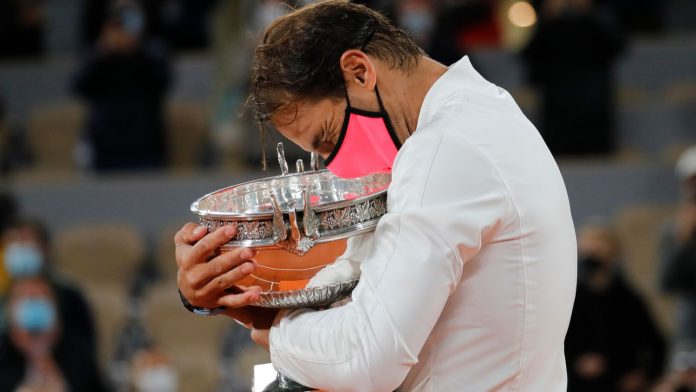 The Spanish tennis champion says he played one of his best finals at Roland Garros, and describes the past months as physically complicated

On Sunday evening, after winning his 13th French Open, Spanish tennis champion Rafael Nadal walked into the press room of the Roland Garros stadium accompanied by a small entourage of security personnel, who like Nadal, were dressed in black. At close to 1.90 meters in height, the sports star from Spain’s Mallorca island blended in with the guards – only his shorts gave him away. Appearing with his agent, Carlos Costa, his father Sebastià and his head of communication, Benito Pérez-Barbadilo, Nadal seemed happy about the win – which has made him the only male tennis star alongside Roger Federer to win 20 grand slam tournaments – but he was also thoughtful about the experience.

“Most people see me with the trophy here and think: so he’s won again. But the truth is that my daily life is much more difficult than it appears to be,” he said, as he placed the trophy on the side of the table. “I know where I am coming from and after the [coronavirus lockdown] there have been very difficult months. No one knows it, but these months have been very complicated on a physical level.”

He added: “It took a lot for me to return to training at an adequate level. I have worked many days without a clear reward, so achieving this goal means a lot to me.”

On the final match, in which he defeated rival Novak Djokovic in three sets (6-0, 6-2 and 7-5), Nadal said: “I am very happy because of all the games I have played, this [the French Open] has been the one with the most difficult conditions. It affected my style and with the cold temperature, my body, which is already a little run down, responds worse.”

“I am not one to talk highly of myself, but I would say my attitude has been perfect. I have not had a single complaint or a bad attitude during training. Before coming here, I knew what I would be facing and I told myself that I was not going to fail and that it is what I have done. I have not failed myself,” he said.

Nearly immediately after the victory, Roger Federer, who himself holds 20 Grand Slam singles titles, sent his congratulations. “I have always had the utmost respect for my friend Rafa as a person and as a champion,” he wrote in a message on social media. “It is especially amazing that he has now won the Roland Garros an incredible 13 times, which is one of the greatest achievements in sport.”

Speaking in English, Nadal thanked Roger Federer for his words of support. “We have a good relationship and we respect each other a lot,” he told the press. “Somehow he is happy when I win and vice versa.”