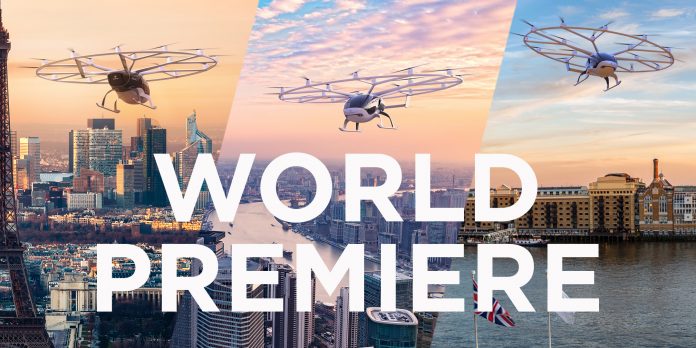 Be the First to Fly with an Electric Air Taxi

At Greentech Festival in Berlin today, Volocopter, the pioneer of Urban Air Mobility (UAM), announced that the world’s first public sale for electrical air taxi flight reservations has started. Effective immediately, Volocopter fans world-wide can reserve their tickets online and be amongst the very first to take this new form of mobility. The VoloFirst costs €300 and can be reserved with a 10% deposit. There are only 1000 presale reservations available for a limited time.

The announcement follows Volocopter’s successful demonstration flights in Stuttgart, at Helsinki’s international airport, and over Singapore’s Marina Bay. “Based on our public test flights and regulatory achievement record, we have paved the way to make electric flight in cities common in just a few years. With the start of reservations, we now invite our supporters and innovators around the world to join us and be amongst the first to experience this new and exciting form of mobility,” said Volocopter CEO Florian Reuter. The reservations for the first VoloCity flights are available world-wide on the Volocopter Reservation Platform.

• A flight with a duration of approx. 15 minutes (approx.) scheduled within the first 12 months after commercial launch.
• A video of the passenger’s flight
• A limited edition, personalized certificate included in reservation

“While the final certification for air taxis is still pending, we do have a detailed realistic timeline to launch commercial VoloCity flights in the next 2-3 years. Moreover, those who reserve now can receive the latest updates about our progress and the commercial launch plan,” said Volocopter’s Chief Commercial Officer Christian Bauer.

Volocopter first made aviation history in 2011 with its “Yoga-Ball” flight. Since then, Volocopter showed its technological leadership in several piloted and unpiloted flights across the world. It is the only eVTOL focused aerospace company to receive Design Organization Approval (DOA) from the European Aviation Safety Agency. Volocopter continues to work closely with cities and partners around the world to bring together all expertise necessary to make battery powered air taxis a reality: regulatory, cities, infrastructure developers, and flight traffic management providers amongst others.

For now, Volocopter is ready to gain market traction, offer the public their future services with a realistic timeline, and become the first electric air taxi company to acquire paying end-customers. A VoloCity model will be on display at the Greentech Festival, which is the platform for green innovators who contribute to quickly making technological, economic, and social change towards sustainability a reality.

Volocopter is building the world’s first sustainable and scalable urban air mobility business to bring affordable air taxi services to megacities worldwide. With the VoloCity, the company is developing the first fully electric “eVTOL” aircraft in certification to safely and quietly transport passengers within cities. Volocopter leads and cooperates with partners in infrastructure, operations, and air traffic management to build the ecosystem necessary to ‘Bring Urban Air Mobility to Life’.

In 2011, Volocopter performed the first-ever manned flight of a purely electric multicopter and has since showcased numerous public flights with its full-scale aircraft. The most notable have been the public test flights at Singapore’s Marina Bay in October 2019 and the world’s first autonomous eVTOL flight in Dubai 2017. Volocopter is also developing products for the logistics and precision agriculture space with their VoloDrone.

Find out more at: www.volocopter.com