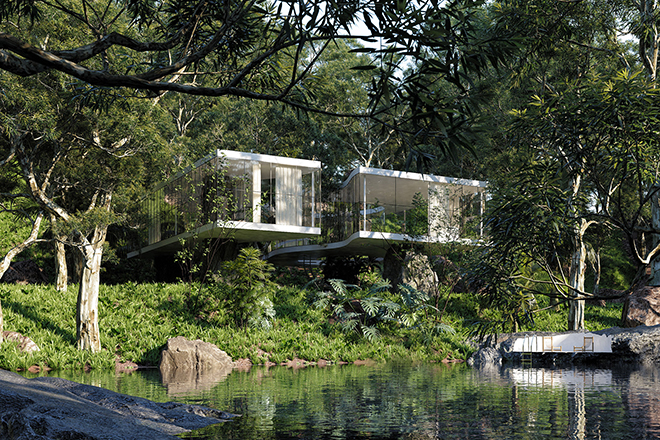 Characterized by its gentle curves, extended raw concrete slabs and a primal relationship with the elements, this delicately suspended home adapts nature into its interior design.

Hidden in the deep forests of the world’s most populous city, and Brazil’s vibrant financial center – Casa Atibaia, São Paulo represents the materialization of designers, Charlotte Taylor and Nicholas Préaud’s most far-out imaginations. Taking cues from modernist architect, Lina Bo Bardi, the dwelling is built on the banks of the Atibaia River, where it is fully enveloped by jungle views, and marks the first collaborative project of Préaud, who is co-founder of 3D visualization practice Ni.acki, and Taylor, who runs Maison de Sable, a studio that works with a range of visual artists to create fictional spaces.

Design Duo, Charlotte Taylor and Nicholas Préaud Collaborate For The First Time on The Casa Atibaia

Regarded an exemplary example of Brazilian modernism, the Casa Atibaia, comprises of white-concrete frameworks and expansive glass windows, supported by the huge jagged boulders that jut out from the terrain below. Maintaining the site’s existing palm trees, the duo work meticulously to create a river-facing and inward-winding, courtyard to help loosely separate the private and communal quarters of the home.

Characterized by its gentle curves, extended raw concrete slabs and a primal relationship with the elements, this delicately suspended home adapts nature in the form of protruding boulders, into elements of the interior design, such as, bookcases, and bed headboards.