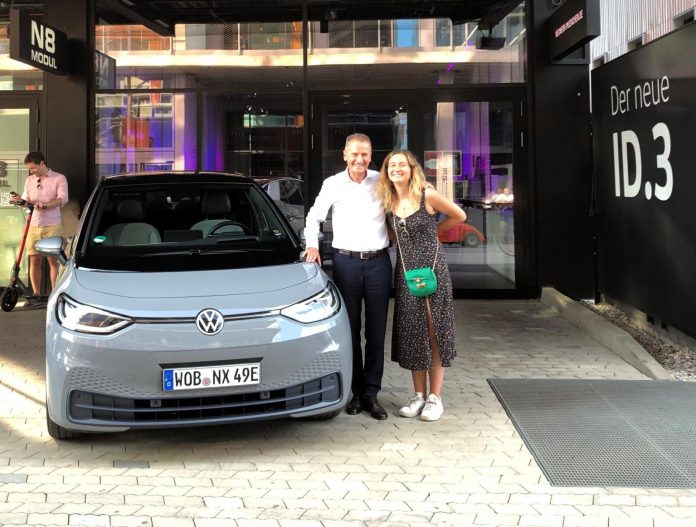 If you see a gray VW ID.3 in southern climes in the next two weeks, take a closer look: It could be that Herbert Diess, CEO of the Volkswagen Group, is at the wheel. Because, as Diess announced on Thursday, he wants to personally test the first electric car on the new MEB platform, which should only reach the first customers in September, including the charging infrastructure for it. That’s why he picked up an ID.3 in Munich and will take it to Italy on the same day.

This is what Diess wrote in a post for the contact network LinkedIn. Similar to Tesla CEO Elon Musk, who Volkswagen is following as quickly as possible according to its CEO and other managers in electric cars, he ventures into social media – but chooses the LinkedIn platform, which is primarily about work. One can understand that as strategic. The success of Tesla is also based on the enthusiasm for the CEO Musk, around whom a veritable cult of people has developed. In this respect, too, Diess seems to want to emulate the Tesla boss, but in a more reserved way.

That won’t be enough for 37.5 million followers like Musk on Twitter, but at least when it comes to electric cars, Volkswagen is gradually getting on the road to Tesla. Even the combustion engine conversions e-Golf and e-up have sold surprisingly well recently, thanks in part to twice increased funding via the German environmental bonus this year. With the completely redeveloped VW ID.3, an electric car is now about to be launched that, despite its lower price, can compete with the Tesla Model 3 with its large battery in terms of range – a first. And on the same MEB basis, the VW ID.4 in popular crossover format (i.e. before the Tesla Model Y in Europe) and many more offshoot electric cars of all major Volkswagen brands will appear in 2021.

In any case, Diess now wrote that he was looking forward to the electric trip on a summer vacation in Italy – Incidentally, Musk at Tesla never vacationed because he found it dangerous for his health. His trip is officially a test drive, the Volkswagen boss reported. Some colleagues at VW were nervous, he was told, but there was no reason to do so. The VW ID.3 has so far received “great marks” after test drives. Diess wants to report on his experiences after the trip.

The electric car test drive seems to have started on Thursday morning at the pick-up location at VW in Munich. Diess did not reveal the means of transport he used to get there, or the destination of the trip. The first Italian cities such as Merano are already loosely within the radius of a charge of the larger ID.3 battery. The range of up to 550 kilometers would even be enough to get to the first coastal cities – at least according to the WLTP standard.

At the latest for the return trip, the VW boss will have to load the ID.3. And his employees at home should sincerely hope that he doesn’t fare as well as the owner of a Porsche Taycan from the same group: The former Tesla driver from Norway went on a big tour to Spain this April with the newly bought sports electric car made – and the app led it several times to inactive charging stations, so that it even had to be towed.