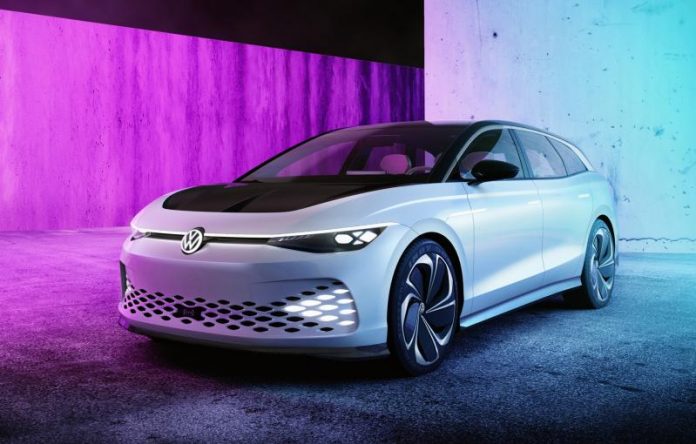 Computer-aided design has been part of the toolkit for engineers creating cars and their components for decades. Yet the actual car design itself hasn’t completely made the digital transformation until very recently.

Volkswagen is one automaker that’s taken at least some of its vehicle design all-digital. In a webconference presentation for the press Monday, Klaus Bischoff, the head of design for the entire Volkswagen Group, said that the new version of the VW Golf (the Golf 8) and all-electric ID family members—including the ID Space Vizzion shown last fall, and perhaps at some point an electric Beetle, he teased—are at the forefront as the automaker’s first vehicles with a truly digital design.

Bischoff and some of his team outlined the steps of how a series of 2D sketches make their way to 3D. First, designers move to wireframing and cloud modeling via VR hardware, moving on to establish surfacing.

That process moves on to details, and moves from coarse pieces like airdams to finer details such as the beveling around them. User interface (UX) design itself is done digitally, too. And eventually, there’s a “build up” of the car to the form in which it might be seen in production form—with wheels and brightwork and glass.

Visualization software allows a shading process and material replication features. Designers then have a rendered vehicle they can rotate and see at different angles.

There are definitely some asterisks to this process, however. Bischoff admitted that creating any kind of immersive 3D rendering that attempts to show a vehicle functioning in a real-world environment remains extremely resource-intensive.

The team still uses clay models at certain points in the process, but less frequently.

Bischoff said that the full range of MEB vehicles, including the much-loved ID Buzz Microbus redux—was designed together, from the start—a feat that likely was aided by the use of the digital suite.

“When we laid out the MEB platform, we worked in a very intense and fast way, more with our colleagues in R&D and the engineers,” explained Bischoff, who said that the project involved a different kind of give-and-take with engineers than normally. “We proposed a lot of body styles and had a board presentation showing our ideas, then we got the task to put all of them on the road.”

“You’ve already seen a lot of them in the shape of the ID family,” he said—clearly a hint that there are more designs to come, or designs that had already been cut along the way.

Going all-digital isn’t cutting down the time required for the whole design process, according to Bischoff, but it is helping to reduce development costs.

Bischoff also mentioned that the sound for the ID cars is unique, created for VW by Hungarian composer Leslie Mandoki, and part of the cohesive design. Bischoff notes that they’ve designed interior sounds to be in line with the profile set by that sound; he’s separately pointed to the new turn signal sound in the ID.3 as one of those.

He agreed that there’s additional freedom in designing electric vehicles, though. There’s more flexibility especially in the way that volumes and proportions can be arranged—with even more in terms of interior design.

Going all-digital might also be able to increase the number of contributions and creative influences in a design. Bischoff has designers of more than 30 nationalities in the company’s design studios, and he said that with any new vehicle’s design, competition is a normal part of the process.

As the head of design for all of the VW Group and its brands, he makes sure that each car has its own design language, while the brand identities are developed accordingly “toward a more fruitful and electric future,” he explained.

When asked if we might expect the same kind of design approach in an electric revival of the Beetle, Bischoff quipped: “Yeah, why not; let’s see.”

Keep in mind that’s the design chief—and it’s certainly not what Volkswagen’s board, or its CEO Herbert Diess, has approved or might say. And this isn’t the first time Bischoff has mentioned the possibility of a Beetle revival. About a year ago, Diess very clearly said that an electric Beetle wasn’t part of the product plan then.

Which begs the question, is it now? Whether it is or not, it’s reasonable to suspect that VW’s designers have an intriguing start to one—virtually, of course.

Harley-Davidson is getting into the electric bicycle business