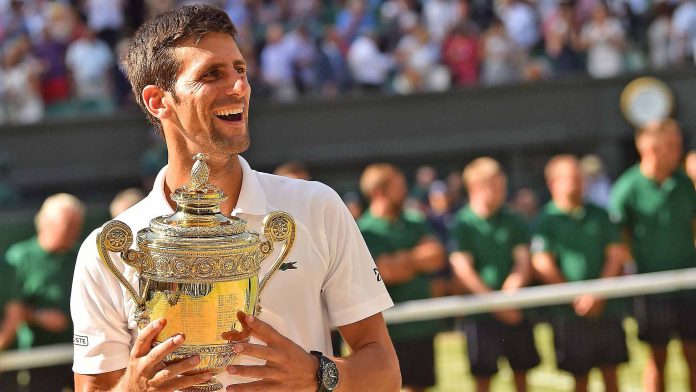 Serbian details how he came back against Federer

Novak Djokovic has competed in some of the most memorable and challenging matches in Open Era history, including the 2012 Australian Open final, when Djokovic beat Rafael Nadal in the longest Grand Slam final match in history – five hours, 53 minutes.

But no match has asked more of Djokovic mentally than did his Wimbledon final against Roger Federer on Sunday. The Serbian saved two match points and won his fifth Wimbledon championship 7-6(5), 1-6, 7-6(4), 4-6, 13-12(3) in four hours, 57 minutes, the longest men’s final in tournament history (since 1877), nine minutes longer than the 2008 final (Nadal d. Federer). To prevail, he had to constantly rely on his mental reserves and inner belief.

“It was probably the most demanding, mentally most demanding, match I was ever part of. I had the most physically demanding match against Nadal in the final of Australia that went almost six hours. But mentally this was a different level because of everything,” Djokovic said.

“I’m just obviously thrilled and overjoyed with emotions to be sitting here in front of you as a winner. It was one shot away from losing the match, as well. This match had everything. It could have gone easily his way.”

Federer had two championship points at 8-7, 40/15 in the fifth set, but the Serbian broke and won the first fifth-set tie-break in Wimbledon history for his 16th Grand Slam crown.

“One thing that probably allowed me to come back and save match points and win this match was the mental stability in those moments,” Djokovic said.

“You need to be constantly playing well throughout five hours if you want to win a match like this. I guess there is an endurance part. But I think there is always this self-belief. You have to keep reminding yourself that you’re there for a reason and that you are better than the other guy.

“I thought most of the match I was on the back foot actually. I was defending. He was dictating the play. I just tried to fight and find a way when it mattered the most, which is what happened,” Djokovic said. “In the most important moments, all three tie-breaks… I found my best game.”

The Serbian, who has won four of the past five major championships, is now within two Grand Slam titles of Rafael Nadal (18) and four of Federer (20). Djokovic admitted his longtime rivals continue to push him.

“We’re making each other grow and evolve and still be in this game,” Djokovic said. “Those two guys [are] probably one of the biggest reasons I still compete at this level. The fact that they made history of this sport motivates me as well, inspires me to try to do what they have done, what they’ve achieved, and even more.”