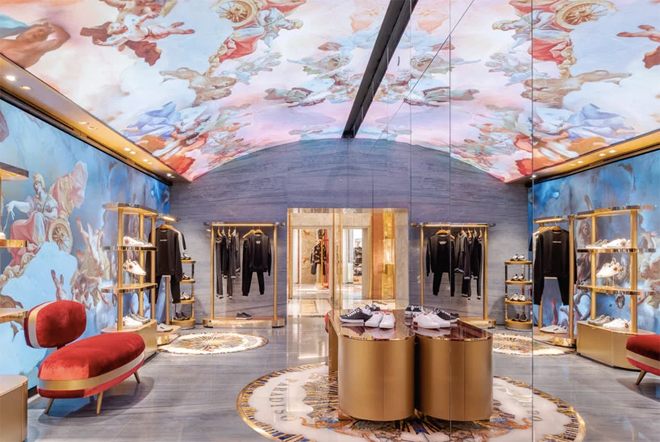 Dolce & Gabbana’s new Rome store takes great inspiration from the heritage and history of Rome, creating a literal cathedral to fashion via its digital fresco

The Sistine Chapel, official residence of the Pope, in Vatican City and a “chapel” in the Apostolic Palace, is best known for its epic ceiling fresco by Michelangelo. Commissioned by Pope Julius II in 1508 to repaint the ceiling of the Sistine Chapel, Michelangelo’s Creation of Adam was a magnum opus requiring 4 years. Needless to say, Dolce & Gabbana’s new Rome store doesn’t take the requisite amount of time for execution thanks to its digital fresco but it’s a  fitting contemporary twist on Vatican city’s rich cultural heritage.

Dolce & Gabbana’s literal cathedral to fashion is no flash-in-the-pan simulacra of one of the history’s most seminal works of art either, the new D&G Rome boutique is home to 59 columns and other immersive architectural details which elevate the new store beyond a purely functional commercial space.

The two-level Dolce & Gabbana Rome boutique is faithful to the brand’s larger than life aesthetics but when it takes inspiration drawn directly from Rome, what results is awe-inspiring. The renaissance work projected on the ceiling and boutique walls is, sadly, not Michelangelo (surprising given Dolce & Gabbana’s deep Catholic roots) but rather the 18th century Austrian painter-draughtsman Paul Troger.

Recognised for his dramatic vitality of movement and palette of light colours, Troger’s style inspired artists like Franz Anton Maulbertsch and Johann Wenzel Bergl. Eric Carlson and his Paris-based architecture office Carbondale, took great care in taking this muse and mapping them in a three-dimensional virtual space to accurately project Troger’s 1731 work Ceiling painting of the Marble Hall for Melk Abbey to the interior of the 800 square meter luxury boutique.

One of the store’s most opulent decor details is in a room on the first floor, which features a digital fresco created by Paris-based creative studio Pastor/Placzek.

It’s no 16th century Palazzo Romano but the latest Dolce & Gabbana Rome store comes close to its opulence, conveying a sense of palatial expansiveness with its ample use of stone, colour and light. The Grand Room, the main floor of the D&G Rome boutique itself spans 22 meters with a 6 meter high vaulted ceiling, capped by two skylight domes, each with handmade stone mosaics of graduated hand picked stones.

The walls themselves are reminiscent of the Vatican palace even if the usual Christian iconography is missing, here, Troger’s Hercules and Athena are “alive” in a billowing digital sky of clouds, thunder and lighting, punctuated with the slow rise of the sun to a soundtrack of ironically, Gregorian chants. The solid walls are themselves, works of art, each striated with different marble strains and combinations and then framed with brushed brass and matched with a skylight of azul cielo marble.

Carbondale’s innovative use of forced perspective manages to convey grandiose Italian baroque in space smaller than the palaces it was meant for, thus the grandeur is augmented by the illusion of depth rather than oppressive within the relatively (compared to a palatial mansion) small confines of a duplex boutique. Hand made murano glass chandeliers designed in 3 different scales play up the illusion to great effect.

Calacatta marble, a highly distinctive Italian marble of whites and golds, decorates the floor with renderings of Romulus, Remus and the She-wolf, iconography from a 2000 year old Roman myth representative of the foundations of Rome. A polished brass but almost gold ‘D’ and ‘G’ is affix, playing up the close relationship between the founders. It’s no Sistine Chapel but the latest Dolce & Gabbana boutique is a literal cathedral to fashion.