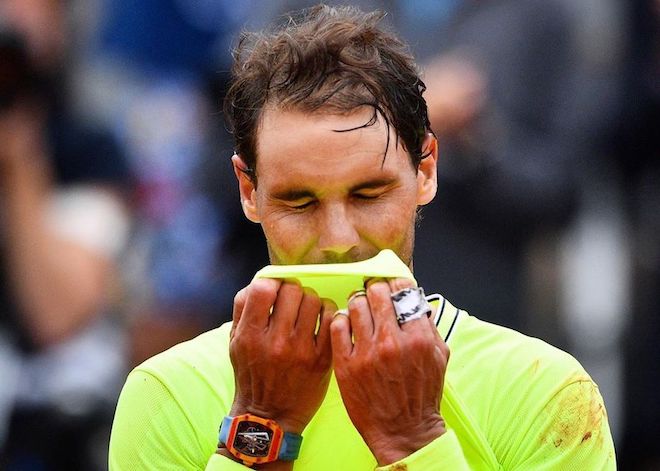 Seated on one’s wrist, a civilian’s timepiece is prone to high velocity changes in direction as well as errant or clumsy knocks against pillars and metal bannisters – in the sporting world, the probability of damage increases by a multitude – take Rafael Nadal for example. In fact, the famed Nadal forehand creates so much power and topspin that it enables him to outplay his opponents.

Over 10 years ago, Richard Mille began working with Nadal on punishing their prototypes. Needless to say, Rafael Nadal’s extreme lifestyle began breaking several million dollar timepieces, including one mundane but equally important aspect of functionality – water resistance whilst in the shower.

The winner of 17 Grand Slam singles titles out of 25 finals, a record holder of 33 Masters 1000 wins and now, a 12 time winner of Roland Garros, Nadal is second only to Roger Federer in terms of tennis accomplishments.

“I can’t explain what I’ve achieved and how I feel. It’s a dream,” – Rafael Nadal on 12th Roland Garros victory

The Spaniard beat Dominic Thiem at the Roland Garros final, winning for the third straight year with a 6-3 5-7 6-1 6-1 victory.

Richard Mille’s association with extreme athletes like Rafael Nadal is not unique. The brand has accrued a large following of extreme “watch testers” including sprinters like South African Wayde Van Niekerk and infamously, American Yohan Blake (fined for wearing his Richard Mille during the Olympics); in F1, Romain Grosjean; and recently, in Polo with Pablo MacDonough.

In 2017, Richard Mille launched the 7th timepiece specially designed to Nadal’s competitive tennis lifestyle – the RM 27-03. Chiefly noted for its 34 gram lightness courtesy of Quartz TPT – an ultra-light and tough material composed of layers of silica filaments and its divisive bright red-and-yellow “Ronald McDonald” aesthetics but really a homage to the Spaniard’s national colours; it’s peerless impact resistance for up to 10,000 Gs, not to mention the calibre mechanics that keep its tourbillon escapement safe from those forces and now, yet another Roland Garros win while worn by the man himself.