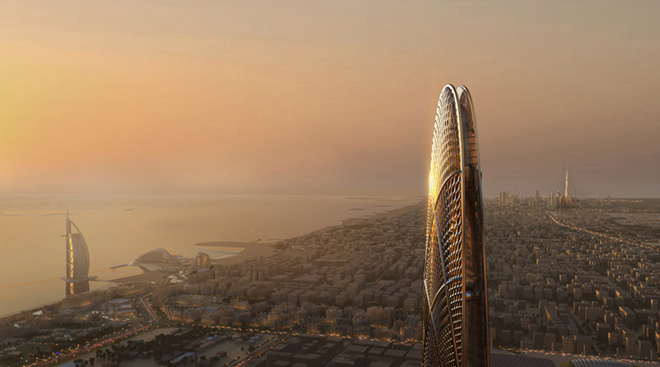 Dubai is home to many sky-high buildings and now, Burj Jumeira will be Dubai’s next mega-structure standing at 550 meters tall, beating New York’s One World Trade Centre to title of world’s tallest building

Since its launch in 2009, the Burj Khalifa has been the tallest building in the world. Initially named the Burj Dubai, it was designed to be the crown jewel of Dubai thanks to the region’s first-ever large-scale, mixed-use development. Renamed in honour of the ruler of Abu Dhabi and president of the United Arab Emirates, Khalifa bin Zayed Al Nahyan, the BurJ Khalifa is about to be replaced by the Burj Jumeria a decade later.

Standing at 550 meters, Burj Jumeira is the Dubai’s (and the World’s) Next Tallest Building

Dubai is the largest city in the United Arab Emirates and home to many beautiful sky-high buildings and the list of high-raises will never stop. Inspired by ripples of dessert dunes and oases, the American architect firm, Skidmore, Owings & Merrill (SOM) worked on a 550-metre-tall split-volume skyscraper in Dubai. Unveiled by state-owned Dubai Holding, the supertall skyscraper has been dubbed as the “new icon in Dubai’s skyline”.

Located near the city’s waterfront opposite the Sheikh Zayed Road and will be the next centerpiece of Downtown Jumeira district, the visuals of Burj Jumeira is pretty magnificent. The 1,804 feet (550-meter) high tower – taller than New York’s One World Trade Center – Burj Jumeira tower’s oval-shaped base is patterned with Mohammed bin Rashid Al Maktoum’s fingerprint; the next tallest building in the world will form the heart of Dubai’s latest prestige project, hosting the region’s premier “social, cultural and artistic events and activities”. The mirrored pond will be surrounded by shops, and be complete with water fountains and a terraced outdoor amphitheater.

Sister of 828-meter-tall Burj Khalifa, the scheme’s façade will contain a digital display capable of lighting up the tower. This interactive ethos will continue inside, with digital displays on the tower’s observation decks. Accessible via lifts with digital screens to carry visitors through a distinctive experience, the platforms will offer a 360-degree panoramic views of Dubai and the opportunity to even skydive. Adding on, there will a flexible event space named the Crown at 450 meters. It will be connected to a sky-lounge and sky-restaurant, which has the ability to extend to host larger scale events.

The entire development designed in the outline of the Dubai ruler’s thumbprint will also contain a terraced outdoor amphitheater for cultural events and a water fountain. The upcoming, neighbouring new residential towers along with Dubai Square Mall is essentially $2 billion tech-driven mega-mall the size of 100 soccer fields.

The Burj Jumeira will be connected to the Sharaf DG Metro Station via covered pathway, which will also extend to the iconic Burj Al Arab Jumeirah, a hotel on an artificial island 280 metres from Jumeirah Beach. However, work on the Burj Jumeira only began on 31 January 2019, and is expected to reach the first phase of complete in 2023.