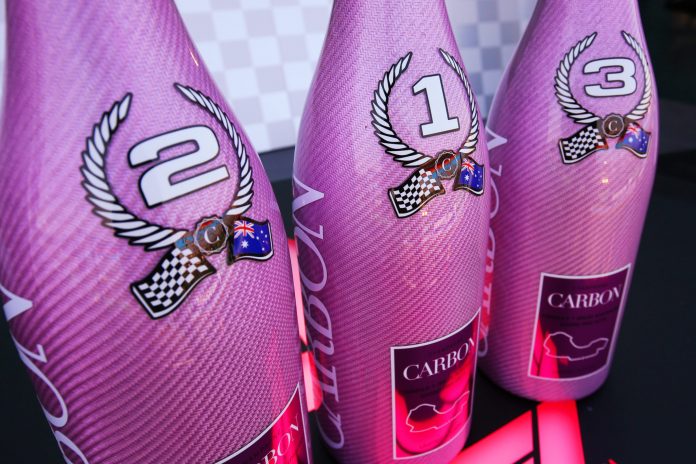 The official champagne of Formula 1, Champagne CARBON, has just announced the official color of the jeroboams that will be handed to drivers on the podium for the FORMULA 1 GRAND PRIX DE MONACO 2019. Champagne CARBON has chosen pink to display its support for the fight against breast cancer. The champagne house is going even further; for this Grand Prix, it will offer three copies of the jeroboams for sale, with the proceeds going to breast cancer research.

The choice was an easy one after the incredibly positive reaction by fans around the world to a trial run at the FORMULA 1 PIRELLI 2018 UNITED STATES GRAND PRIX for Pink October, the campaign which devotes itself to raising money for, and awareness about, breast cancer throughout the month. The presence of pink bottles on the podium was greeted so enthusiastically by social media, the company didn’t think twice. For the FORMULA 1 GRAND PRIX DE MONACO 2019, Champagne Carbon has also decided to offer the public a chance to buy three copies of jeraboams identical to those given to the champions. They will be available online, 10 days before the Grand Prix. All the proceeds from the sale of these bottles will be handed over to research into a cure for breast cancer.

Owner Alexandre Mea commented: “In our blends, grands crus come from some of the finest vines in Champagne. So these F1 jeroboams contain champagne of an incredibly high quality which is just beginning to express itself thanks to at least five years of aging in the cellar. Monaco, here we come!”
For the FORMULA 1 GRAND PRIX DE MONACO 2019, the jeroboams – a combination of unique flavors, performance and style – will be available from 20 May 2019 from 10 am GMT on the website https://www.champagne-carbon.com/fr/intro/

Dynamic and high-caliber: the online world premiere of the Audi e-tron GT

The 12 Arches of LV Inspiration