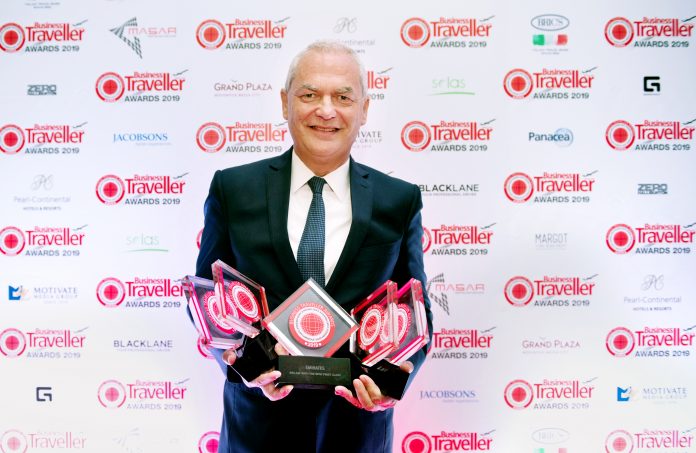 Thierry Antinori, Executive Vice President and Chief Commercial Officer for Emirates received the awards on behalf of the airline and commented: “It is an honour to receive these five gongs from the Business Traveller Middle East Awards 2019 and to see that our brand is recognised by customers is a fantastic encouragement to continue to raise the bar and develop innovative products and services, with a strong customer focus aligned with our brand promise to ‘fly better’. We would like to thank our employees for the hard work and commitment they deliver for an exceptional customer experience which helps Emirates stand out on the global stage day in and day out.”

Emirates Skywards, the loyalty programme of Emirates and flydubai, has over 23 million members who enjoy earning and redeeming Skyward Miles on flights, hotel accommodation, and global lifestyle brands. Earlier this year, Emirates Skywards opened a centre in Terminal 3 at DXB to function as a one-stop customer touchpoint for all new and existing members – offering consultation services for enrolment and profile creation.

The airline’s state-of-the-art, First Class lounges at Concourses A, B and C in DXB offer premium customers a chance to refresh using showers and enjoy savouring in gourmet cuisines.  With a seating capacity of over 2,500 – the award winning lounge offers a business centre, a la carte dining, spa with treatment rooms, dedicated duty free area, premium cigar lounge and a complimentary shoe shine service.

Our Media centre contains all of our business updates, including the latest press releases and articles and our contact details.

The Emirates story started in 1985 when we launched operations with just two aircraft. Today, we fly the world’s biggest fleets of Airbus A380s and Boeing 777s, offering our customers the comforts of the latest and most efficient wide-body aircraft in the skies.

We inspire travellers around the world with our growing network of destinations, industry leading inflight entertainment, regionally inspired cuisine and world-class service.

Adam Munday is welcoming us to Ibiza

The world’s 10 hottest brands according to The Lyst