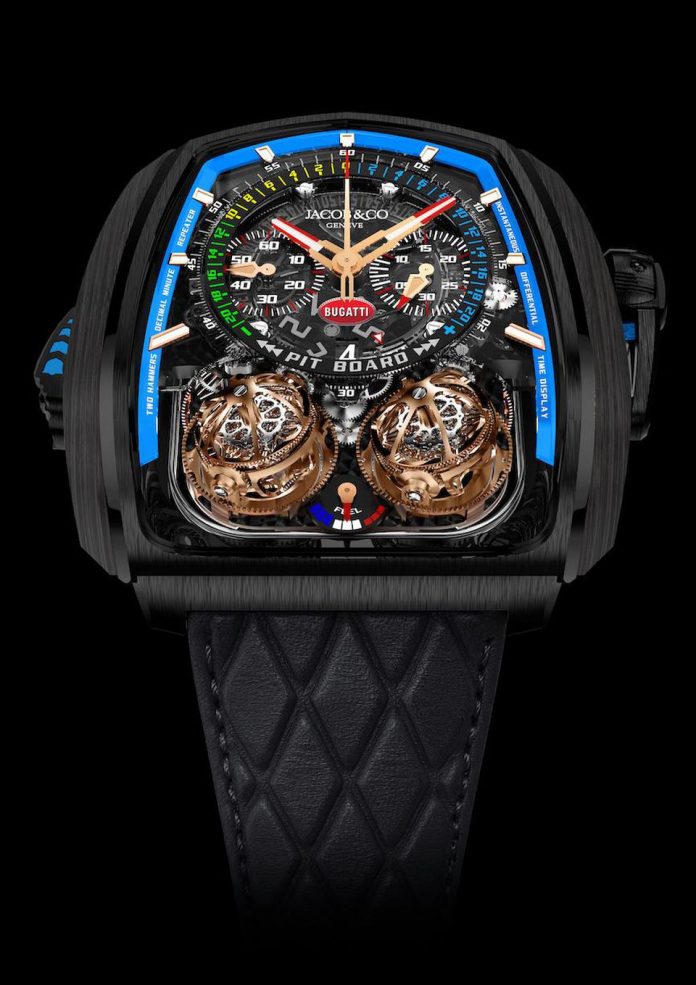 In a move that surprised many in the watch industry,  Jacob & Co. today announced a long-term partnership with Bugatti car manufacturer to collaborate on a series of exclusive co-branded products. According to a release issued today by Jacob & Co., the partnership aims to push “the limits of what seems mechanically possible.”  Stephan Winkelmann, President of Bugatti,  and Jacob Arabo, President and founder of Jacob & Co., selected the days leading into Baselworld to make the announcement. The reason this news comes as a surprise is because Bugatti has had a long-standing partnership with Swiss watch brand Parmigiani Fleurier.

Because of that  15-year partnership, we reached out to Parmigiani. According to Davide Traxler, CEO of Parmigiani Fleurier,  “We would like to express our thanks to Bugatti for 15 years of fruitful partnership and the successes we achieved together. Indeed, the great collaboration we had inspired us [to create] many horological developments and mechanical wonders. Today, we are focusing on new watchmaking fields. We wish Bugatti all the best for its future projects.”

One of those  ‘future projects’ has arrived. The new partnership between Jacob  & Co. and Bugatti launches with two new timepieces. One of them is a  limited edition of the Jacob & Co. Twin Turbo Furious: The Twin Turbo Furious Bugatti Edition.  This watch boasts two triple-axis tourbillons (to ensure precision timing), a  column-wheel chronograph and a decimal repeater that chimes the 10-minute intervals of time past the hour.

Design wise, the watch features a turquoise blue outer ring on  dial in order to pay homage to Bugatti’s 110-year anniversary blue Chiron. It also features the Bugatti logo on the center of the dial between teh chronograph counters. Additionally, with a nod to the automotive spirit, Jacob & Co posistions the pwoer reserve indicator at 6 o’clock on the dial and refers to it as “fuel” indication. There will be 18 pieces made in carbon fiber, 18 pieces  made in rose gold and 3 that will boast diamonds. Each of the 39  pieces will be individually numbered. The watch will retail for 525,00 Swiss Francs (roughly $524,400).

The second watch being unveiled in Baselworld is the Bugatti Chrono Edition Limitee 100 Ans. As its name suggests, the collection pays tribute to the founding of the brand by Ettore Bugatti 100 years ago in 1909. Just 110 pieces will be made to honor each year since that founding. The watch is inspired by Jacob & CO’s original Epic X Chrono with column-wheel caliber.  This version, however, sports a a forged carbon case and features a black matte dial with the colors of the French flag running vertically between the subdials. It is finished with a special rubber strap inspired by the Chiron. It will retail for 36,000 Swiss Francs.

“For this project we found the right partner in Jacob & Co., because we are both absolutely dedicated to innovation with superb technology, absolute beauty, craftsmanship and the highest quality of the materials”, explained Stephan Winkelmann, President of Bugatti, in a statement issued jointly with Jacob & Co.

“When I look at a Bugatti Chiron, the perfectly refined engineering is so powerful that sometimes the car appears to be moving even when it is standing still,” Jacob Arabo, founder of Jacob & Co., added. “That’s the same feeling I get when I wear our high complication timepieces: a rush, a sense of energy, movement and power that can barely be contained.”

I have interviews planned this week with both Jacob Arabo and Stephan Winkelmann, so I’ll bring  more news as we have it.