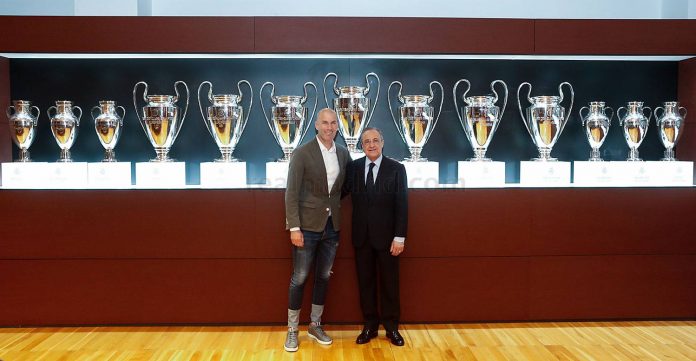 Florentino Pérez took his place alongside Zinedine Zidane inside the media room at the Santiago Bernabéu in the wake of the announcement that the French coach has returned to Real Madrid. The president said the following in his address: “We madridistas have shared in one of the most glorious chapters of our 117-year history. We’ve been European champions for over 1,000 days now. We’re aware that we’re going through times of adversity and know just how painful this is for our supporters”.

“However, I want to make it clear that these players have delivered triumphs and some unforgettable trophy successes. To win the Champions League four times in five years is an almost irrepetible feat. These players make us proud and we mustn’t forget what they’ve achieved. This club faces a massive challenge every single day. These have been years of glory, but this season we haven’t achieved the results we wanted to. Our duty is to bring about the reaction that this team needs”.

Words of thanks
“I want to thank and offer recognition for the job done by [Santiago] Solari as head coach. He has shown great professionalism, dedication and loyalty to this club, which is his home, right up until the end. He’s a part of Real Madrid on his own merit, he loves this club and kept doing everything he could right until the end. What’s more, he has managed the team with unquestionable commitment from the very first day that he took up the task of coaching the team in what were difficult circumstances. I want to express our thanks to Solari, who we’re keen to see remain a part of our club, if he so wishes”.

Icon
“We’ve got a great squad, but following these years of triumphs, we have to admit that we haven’t reached the standards that we expected to as a group this season. We want to begin to work on writing a new, exciting chapter. A chapter in which we’ll be led by one of our big icons as we look to rediscover the excitement, ambition and the utmost competitiveness seen throughout all of these years. We’re here tonight to welcome Zidane”.

FLORENTINO PÉREZ: “YOU REPRESENT THE GREATNESS AND SACRED VALUES OF THIS CLUB”.

Dear Zizou, your passion for Real Madrid sees you reunited with our club, the world’s best, in an eternal relationship between you and Real Madrid that dates back to 2001. You take on the role of head coach at a difficult time. The fact that you’re back here today is because you love this badge and everything it stands for amongst our millions of fans. When we offered you the chance to come home five days ago, you once again displayed your love and loyalty towards Real Madrid”.

“Your commitment to the club is something that excites all madridistas, to whom who represent the sacred values of Real Madrid. Under your stewardship, we lifted nine pieces of silverware, which cemented Real Madrid‘s dominance in world football. We’re proud that you’re back with us again. You represent the greatness of this club. Thank you,  Zizou”.

Zidane: “I’m delighted to be back home”
“It’s a special day for everyone and I’m happy, that’s the most important thing. As the president said, I’m very happy to be back home. What I want to do is get back down to work and I love what this club has always stood for. The only thing that I’m focused on is getting down to work again tomorrow”.

The unveiling was rounded off with a group photo, which featured president Florentino Pérez;Zidane and his wife; the club’s honorary president, Paco Gento; members of Real Madrid‘s board of directors and club legends.