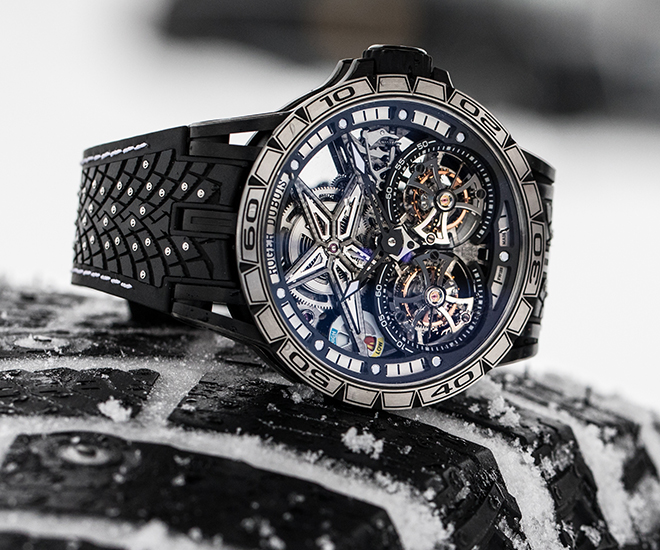 Roger Dubuis and tyre specialist partner Pirelli have launched the Excalibur Pirelli Ice Zero 2 timepiece, setting their sights on mechanical, horological and automotive extremes in snow-bound Sweden for a test-drive event. At Roger Dubuis, the Excalibur has often been the artistic canvas for the maison to express its watchmaking know-how and push existing technical and aesthetic boundaries,

Here the RD105SQ Double Flying Tourbillon calibre with differential symbolising mechanical wizardry of one of modern watchmaking’s most progressive brands finds new expression in the Roger Dubuis Excalibur Pirelli Ice Zero 2. With its disruptive materials and progressive complications, the marvel that is the Excalibur Pirelli Ice Zero 2’s double flying tourbillon isn’t on show but rather the “lifeblood” which keeps the 366 operating components operational even at extreme temperatures.

Typically, the higher the temperature becomes, the lower the viscosity of the calibre’s lubricants. Once temperatures fall below zero however, the oil becomes more viscous, that is to say – thicker. What this means is that if not formulated correctly, timepieces like the Roger Dubuis Excalibur Pirelli Ice Zero 2 will suffer from increased friction throughout the movement, requiring more energy to “muscle” the train wheel into turning and consequently, the escapement and balance assortment. When this happens, a watch like the Excalibur Pirelli Ice Zero 2 can lose amplitude in the oscillation of its balance and the watch begins to lose precision. Hence, Roger Dubuis has analysed this possibility and compensated for it in their latest Excalibur.

Here, in the tundras of Sweden, the “Perfect Fit” partnership between tyre expert Pirelli and Roger Dubuis is greatly magnified. The new Roger Dubuis Excalibur Pirelli Ice Zero 2 is characterised by technical exclusivity and R&D driven approaches of each, resulting in a unique blend of horology and automotive excellence.

Pirelli had developed a new patented studded tyre for high performance on ice in the most wintery of spine-chilling conditions. With optimized and patented stud distribution and a tread design developed to achieve continuous grip and high driving comfort, the Pirelli Ice Zero™ is the ultimate demonstration of Pirelli’s incomparable expertise in the world of high-end tyres for premium vehicles like the world’s first super SUV – Lamborghini URUS ST-X – this time on snow and ice. The new Roger Dubuis Excalibur Pirelli Ice Zero 2 bears its famous skeleton signature in the format of a double flying tourbillon oscillating at a frequency of 2 x 3 Hz, further enhanced by a differential mechanism that calculates the optimum average of both regulators; and equipping the eight-piece limited edition Excalibur Pirelli Ice Zero 2 timepiece with a strap complete with the same state-of-the-art titanium nail studded pattern. The latest Roger Dubuis Excalibur is further equipped with a QRS ‑ Quick Release System for easy strap changes and delivered with one additional free strap and one additional free crown

“Challenges are not to be faced alone, but with the team” – Interview with...

Bulgari hotel to open in Tokyo in 2022