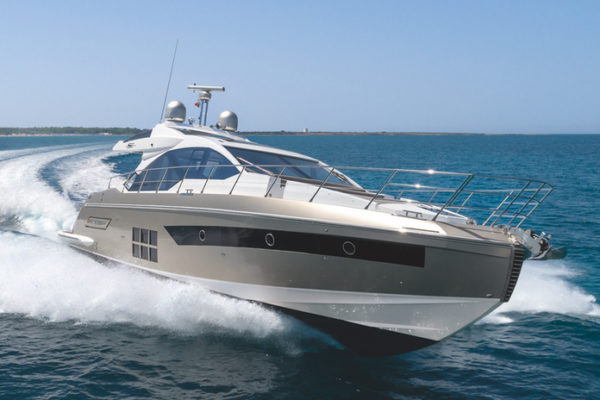 As Azimut expanded its Grande series with world premieres of the 32 Metri and 25 Metri at the 2018 Cannes Yachting Festival, the Italian builder also slipped in the global debut of the S6 – the little sister of the S7 that ushered in this new-look sports series at the same event a year earlier.

With an exterior by Azimut’s long-time collaborator Stefano Righini, the S6 is the smallest yacht in the Italian yard’s new-generation sports range

The second model in the new S collection had made appearances earlier last year at the Milan Design Week and the Azimut Benetti Yachting Gala in Puglia. However, the 59-footer only went public in Cannes, where it picked up a ‘Best innovative project’ accolade for its category at the World Yachts Trophies.

In truth, the model builds on many of the key elements introduced on the 70ft S7 such as an extensive use of carbon-fibre, the triple Volvo IPS propulsion system and an interior by Francesco Guida, only his second project with Azimut.

Stefano Righini, who has worked with Azimut for three decades, was again responsible for the exterior design and styling of a pure coupé that’s everything an S class model should be –sporty, speedy, stylish.

Righini’s sharp exterior reflects and accentuates the range’s sportiness. The big, diamond-shaped deckhouse windows are built on slightly angled planes and have diagonal joints in a typical Righini innovation, giving the yacht a recognisable profile.

The S6 retains other distinctive S-model features such as the bow shield on the trapezoid bow and the special geometry of the glazed surfaces in the hull, which flood the interiors with light and the owner’s suite in particular.

Lighting plays a key role, with indirect sources used to give the spaces an airier feel. Owners can also choose more accentuated colour contrasts that set off Thai wood against dark oak.

The big outdoor spaces include a cockpit featuring a roomy, aft-facing sunbathing area and a dining space with mobile bar shaded from the sun. Another sunbathing area forward in the bow is trapezoid in shape, with a big free area and a forward-facing sofa.

A lot of effort has gone into the storage areas, with lockers designed to comfortably accommodate fenders, chairs and onboard equipment. The layout of the interiors is geared to more space, comfort and convenience, while keeping the S collection’s sporting spirit.

A spacious, welcoming lounge features a dining table and a tailor-made sofa, which faces a 49-inch TV.

Like the latest-generation sports boats, the galley is located on the main deck. Minimalist, clean and very stylish, this area blends seamlessly with the rest of the furniture and has appliances by Miele, Azimut’s preferred brand for many years.

The lower deck is reached by a central stairway and has three cabins and two bathrooms. The master cabin midships with en-suite has a double bed in a diagonal arrangement, which is novel although it doesn’t necessarily feel like the best use of space.

Small armchairs or, on request, a vanity table or other furniture complete the decoration of this room, which really benefits from the six large windows on either side, offering remarkable views and light for a cabin on a yacht of this size.

The bed is set diagonally in the full-beam master suite

The VIP cabin is typically in the bow on the yacht this size, but this room benefits immensely by being set a little further aft – so gaining hugely in width – due to the decision to put the crew cabin in the bow, all made possible by the reduced engine room due to the compact IPS system.

The VIP cabin offers and full-height spaces on both sides of the bed, making it a valid alternative to the owner’s suite, and has a portside en-suite bathroom, which doubles as the day head. The twin cabin is to starboard.

The superstructure, stern platform, garage, sun roof and part of the deck are made from carbon-fibre, which reduces weight and improves fuel economy, structural integrity and durability.

Azimut remains the only major builder of serial-production boats that feature the extensive use of carbon, a feature that started with the 72 flybridge launched in 2015. One of the reasons for this is the Avigliana shipyard’s in-house post curing oven, which raises the temperature of manufactured parts to 60°C in a controlled manner, improving the composite material’s mechanical characteristics.

There’s plenty of lounging space on the foredeck

The lamination process for all the big carbon and glass fibre surfaces makes exclusive use of vinyl ester resin, which is applied both to the leathers for exteriors and in the infusion cycle.

Like the S7, the S6 is fitted with three IPS propulsion units and the benefits are numerous. After Azimut’s Innovation Lab recognised the potential of Volvo Penta’s three-unit IPS solution, it worked with the Swedish company’s engineers to optimise the hull lines, with a special focus on the design of the central tunnel that houses the third IPS unit.

The tunnel’s geometry is defined as a function of the hull’s target draught and optimised to reduce water resistance. The hull has a deadrise of 15.5 degrees at the transom and 21.2 degrees midships.

The three integrated propulsion systems are driven by a 7.7-litre Volvo Penta D8 engine with six inline cylinders, a twin-flow turbo system and a volumetric compressor, rated 550bhp (405kW) and delivering a top speed of up to 35 knots.

The S6 has good sunbathing areas fore and aft, and a large swim platform

The system’s most important benefit is vastly improved fuel consumption, plus it reduces vibration, noise and gross tonnage. It also increases the distance between the external pivoting pods, improving handling response and acceleration, while the reduced size means the engine room can be positioned further aft, freeing up more room for lower-deck accommodation.

The IPS system’s other benefits include joystick driving and Active Trim Control, which automatically adjusts lateral and longitudinal trim to optimise fuel efficiency at all speeds.

The compact engine room also frees up space for a large garage that can contain a 3.3m hydrojet tender, including the Pirelli J33 – Azimut Special Edition built by Tecnorib. For such a stylish and powerful motor yacht, the S6 sure packs a lot in and build well on the strong innovations pioneered by its big sister.

The best winter festivals in Europe