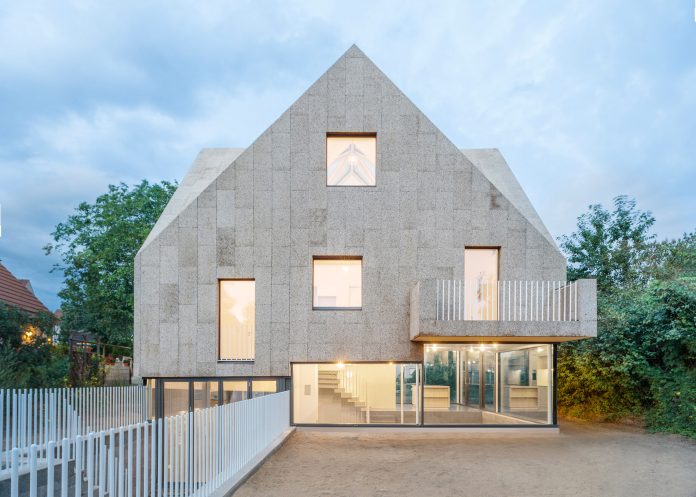 Cork Screw House, designed by Rundzwei Architekten in Berlin, has a facade and roof clad with waste cork from the wine industry.

The rectangular-shaped panels of cork provide a thermally efficient skin for the house, while also creating a bold, “monolithic” aesthetic.

Rundzwei Architekten’s decision to use the material was result of its search for a product with a high acoustic performance, which also led it to discover the environmental benefits of cork.

“Initially it was through the client’s interest in achieving good acoustic performance that we came across this unusual choice of material,” said the Berlin-based studio, led by Marc Dufour-Feronce and Andreas Reeg.

“However natural cork also has very high insulation values and is well suited to use as cladding. The choice of this material contributes significantly to the energy efficiency and sustainability of the building.”

Cork Screw House’s facade panels were made through a sustainable process of heating and pressurising waste cork granules, which were acquired from a wine-bottling company.

Heating cork causes it to release a natural resin that binds its granules together, forming lightweight, durable slabs that can be cut to a desired size.

Inside the house, there are a series of bright, open split-level floors made from timber, which are positioned around a spiralling staircase at its centre.

They sit atop a concrete base, which is embedded partially below ground level, and forms the floors of the lower levels of the house.

This layout was designed by Rundzwei Architekten to maximise useable floor area of Cork Screw House, which was limited by strict building regulations.

“Although the local planning regulations only allow for a maximum floor size of 100 square metres, by lowering the ground floors and arranging the upper floors in multiple split-levels, we have maximised the floor area to over 320 square metres,” explained the studio.

Nestled into the concrete base, the lower floors comprise a master bedroom that transitions into a staggered kitchen, living and dining area.

This bedroom also has access to an adjoining sauna, bathroom, and a linear pool that extends out into the garden, hidden within the concrete walls.

Above, the upper levels of the house comprise a further two bedrooms and bathrooms, another living and dining area, as well as a study space on the top level.

Rundzwei Architekten punctured each room with large windows. Combined with a gable skylight above the central staircase, this reduces the need for artificial lighting throughout the house, improving its energy performance further.

The studio also incorporated space on the facade for a potential second entrance, which gives its occupants the option to convert the house into studio apartments in the future.

Cork, the sustainably harvested bark of the cork oak tree, is a durable, insulating material that has been used by several architects as a cladding material in recent years.

In 2017, architect Lisa Shell used it to wrap the timber frame of a cabin in a salt marsh on England’s east coast, which helps to protect it from salty winds.

More recently, Studio Bark developed a cork-building prototype, which demonstrates how the material can be used to form an entire building envelope. Named Cork Studio, it can be completely recycled, reused or composted.