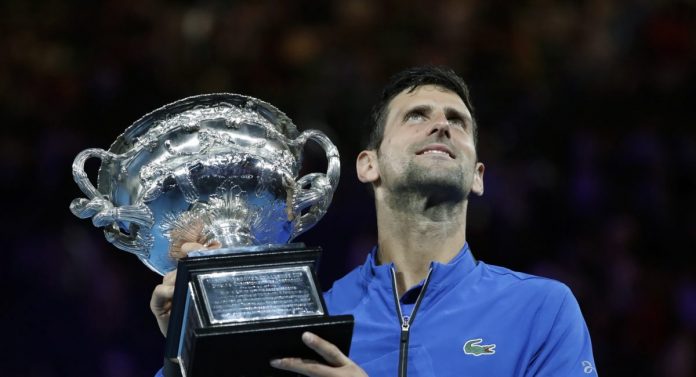 Novak Djokovic produced one of the great grand slam final performances to swat aside Rafael Nadal and become the first man to win seven titles at the Australian Open.

The predictions had been for something akin to their near six-hour battle in the final here seven years ago but Djokovic had other ideas, taking just two hours and four minutes to claim a 6-3 6-2 6-3 victory and a 15th slam crown.

The title, his first in Melbourne since 2016, separated him from the tie he was in with Roy Emerson and Roger Federer, while Djokovic is the first man ever to win three successive slam titles on three different occasions.

Three years ago, of course, he went on to make it four in a row by winning the French Open, and on this form even Nadal on clay will be hard pushed to prevent a repeat.

Part of the problem was that the Spaniard did not appear to trust the more aggressive game that had carried him through to the final without the loss of a set and instead reverted to his more defensive clay-court style.

That was manna from heaven for Djokovic, who, instead of fearing the Nadal forehand, sees it as something to be attacked, and time and again he got his reward.

This was their seventh meeting in a slam final and the first to be decided in straight sets, with Djokovic’s final tally of 34 winners and only nine unforced errors demonstrating just what an extraordinary performance this was.

Nadal began their 53rd meeting trailing 27-25 but had not won a set in seven hard-court matches against Djokovic since 2013 so perhaps it was not surprising he began nervously.

Djokovic was ruthless, dropping only one point in the first three games, and only one on serve in a first set that was far less close than the scoreline suggested.

Nadal, who came into the tournament having not played a competitive match since the US Open, was so tight he completely missed an attempted forehand but by the end of the nine games there were at least signs that he was starting to warm to his task.

But the forehand, which has been so destructive this tournament, continued to be more miss than hit and nothing less than perfection was going to be good enough against Djokovic in this form.

He broke the Nadal serve again to lead 3-2 and finished off the second set with a run of five games in a row.

Djokovic appeared to be throwing in drop shots just to give himself a challenge so utterly in control was he, and the pattern did not change in the third set, with the Serbian moving ahead in the third game.

He finally faced a break point at 3-2 but Nadal netted and with that went his final chance to get any kind of foothold in the match.

Djokovic clinched victory on his second match point when, aptly, Nadal missed once more with a forehand.