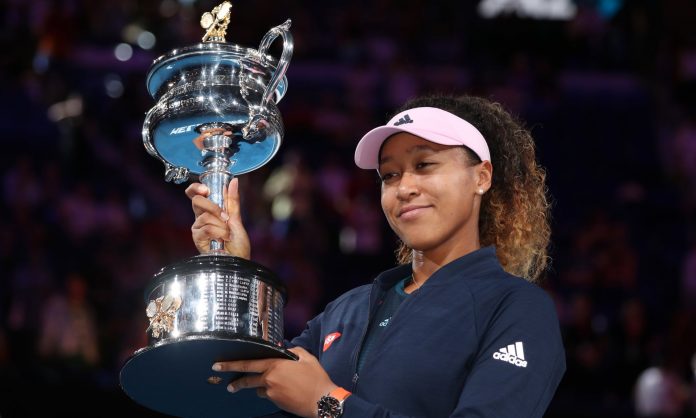 Naomi Osaka has won her second straight Grand Slam tournament by beating Petra Kvitova in the most dramatic of Australian Open finals.

In a big-hitting, high-quality affair on Saturday night, Osaka squandered three consecutive match points in the second set and looked on the brink of unravelling before re-focusing to win 7-6(2) 5-7 6-4.

After the bittersweet experience of winning last year’s US Open title amid controversial circumstances, this time Osaka experienced a truly joyous moment; an unreturnable first serve saw the crowd erupt, and the Japanese sank into a crouch at the baseline, overwhelmed.

“Huge congrats to Petra. I’ve always wanted to play you,” Osaka said during the trophy presentation.

“You’ve been through so much and honestly I wouldn’t have wanted this to be our first match. You’re really amazing and I’m honoured to have played you in the final of a Grand Slam.

“Thanks to my team. I don’t think I would have made it through this week without you guys. Behind a tennis player is always a team and I’m really grateful.”

The Japanese becomes the first player to win two consecutive Grand Slam trophies since Serena Williams in 2015, and the first player to back up her maiden major title at the very next Slam since Jennifer Capriati won the Australian and French Opens back in 2001.

And with the win comes another milestone – Osaka will become the game’s newest world No.1.

At this time last year, she was ranked No.72.

For Kvitova, this tournament marked the first time she had reached a Grand Slam final since being seriously injured with a knife during a home invasion in December 2016.

“It’s crazy. I can’t really believe that I just played the final of a Grand Slam again,” she said in an emotional speech.

“Thank you (to my team) for sticking with me even if we didn’t know if I would be able to hold a racquet again. You were there every single day supporting me and staying positive for me, which I really needed. I probably wasn’t really easy, so thank you.”

The top ranking was on the line in a second straight Australian Open women’s final. Yet last year’s combatants, Caroline Wozniacki and Simona Halep, entered the match having each lost their only two previous Grand Slam finals. Neither Osaka nor Kvitova, conversely, had ever lost a major final.

The other difference was the nature of the play. The 2018 decider pitted two counterpunchers against one another. This year’s finale was all about aggressive, first-strike tennis.

The quality of the ball-striking certainly didn’t disappoint. Neither woman appeared nervous as they each set about winning points behind big serves and powerful blows from the baseline.

Not that this was a serve-fest; Osaka and Kvitova both earned break points, but these were mostly erased with unanswerable serves, or powerful shots off short replies.

Games continued to click over with the server, with Kvitova showing off her well-rounded game by playing back-to-back drop shot winners to hold for 5-5.

The somewhat subdued crowd, who up until this point did not have a great number of rallies to sink their teeth into, came alive in the 11th game after a fabulous rally – extending 18 shots – which ended with Kvitova’s drop shot catching the tape and dying on Osaka’s side of the net.

Osaka went on to hold, and earned two set points in the following game, which Kvitova saved.

Fittingly, the set progressed to a tiebreak, which Osaka dominated, blazing three winners to build an insurmountable 5-1 lead.

She had the first set in her grasp, a crucial outcome; Osaka had won her past 59 matches after snaring the first set. And this was the first set Kvitova had dropped all fortnight in Melbourne.

The Czech responded strongly, bludgeoning two forehand winners on her way to breaking serve in the opening game.

Yet from 2-0 down, Osaka won four straight games to wrest control of the set, the force of her returns beginning to wear down Kvitova, whose game was now leaking errors.

That pattern repeated in the ninth game; Osaka crushed a return down the court at Kvitova who could not control the shot. Kvitova sent it long to go down 0-40, and Osaka held three championship points.

Here, the match dramatically turned. Kvitova saved the first with a winner, and Osaka suddenly started missing her returns.

She had a chance to serve out the match when 5-4 up, but double-faulted to fall behind 15-40. Another error saw Kvitova break serve and level at 5-5.

From 3-5, 0-40 down, Kvitova would reel off 23 of the next 27 points against Osaka, whose game and emotions were completely unravelling.

The match was now in a third set, and Osaka needed to stem the tide. That moment came in the second game, when she completed a settling hold of serve to lock scores up at 1-1. Back on track, she broke serve with a backhand winner in the very game.

It was an advantage Osaka would not let slip a second time.

Soon came the time to step up to the line to serve for the title. And she belted an ace and a forehand winner before forcing an error to arrive at triple match point – again.

She slammed another powerful first serve to draw a return error, ending an incredible match.