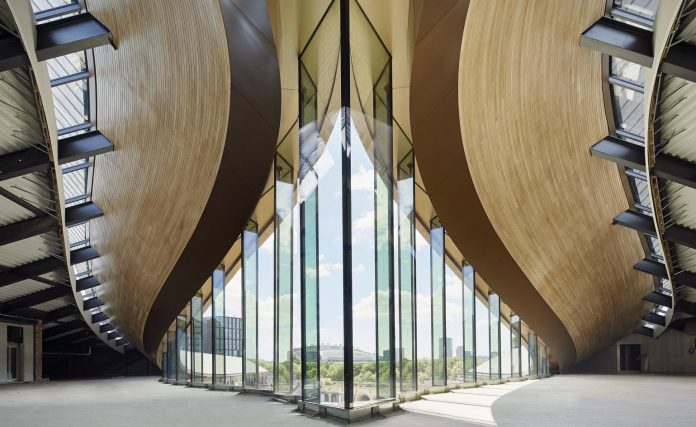 What makes some buildings better than others is a sense of timelessness, as Bjarke Ingles once said, “Architecture is the art and science of making sure that our cities and buildings fit with the way we want to live our lives.”

2018 proved that architects struggled in preserving the past while hellbent on implementing the technologies of the future. Here is a list of the best buildings completed in 2018:

Thomas Heatherwick’s latest design in central London is the perfect blend of new and old. The legendary designer transformed a pair of Victorian sheds that were once used for the storage and distribution of coal around London. The derelict buildings have been reborn thanks to Heatherwick’s design, which was part of an expansive redevelopment of buildings and pedestrian spaces in the surrounding area. Coal Drops Yard contains 9,290 square metres of shops and restaurants, arranged inside the linear two buildings on either side of a central space.

The St. Louis Arch is such an iconic American landmark that it justifiably needed a museum to tell its remarkable story. In 2018, architect Cooper Robertson and James Carpenter Design Associates spearheaded for a major, $380 million renovation of the park. The changes meant an expansion of the museum, the addition of a cafe, and the raising of the riverbank to prevent flooding. Featuring six themed exhibit areas, this innovative and interactive museum celebrates America’s pioneering spirit, tracing the story of the Native Americans, explorers, pioneers, and rebels who made America possible.

This year saw the newest addition to the Glenstone, a previously completed space that allows visitors to experience art, architecture, and nature in a way most museums could never offer. The latest section was the Pavilions, a 240,000-square-foot expansion increases the capacity for visitors from 25,000 to 100,000 annually, making it one of the world’s largest private museums. The expansion consists of a series of discrete masonry forms that house a single artist’s work. Each structure will have a window facing a central courtyard, while one room will face outwards toward the landscape, gently tugging the museumgoers’ attention to reveal the splendors of Potomac’s landscape.

Calgary’s new library isn’t merely a space to house books and computers but a building that better connects residents to the city. Located at the intersection between Downtown Calgary and the East Village, the Snøhetta-designed structure lifts to allow the existing Light Rail Transit Line to pass through. The geometrically designed exterior draws residents into activities occurring inside the library, while those upper levels (which aren’t as open to the public to see from outside) allow for a more quiet, traditional library experience.

V&A Dundee was designed by renowned award-winning Japanese architects Kengo Kuma & Associates, following an international competition, and is Kuma’s first building in the UK. It is inspired by the spectacular cliffs that surround the country, which is where the sharply angular façade comes into play. Whether visitors walk into the building or simply walk around it, they will feel the experience of being in or near an incredible structure. Opened in September, the V&A Dundee, an off-shoot of London’s Victoria & Albert Museum, is certainly striking. Its craggy concrete structure, formed of what appear to be two inverted pyramids or the hulks of great ships washed up on the shore, is, says its Japanese architect Kengo Kuma, influenced by Scottish cliffs. The total cost of design, construction and fit-out is £80.11m.

The National Memorial for Peace and Justice, by MASS Design Group (Montgomery, Alabama)

Arguably the most powerful building to be completed in 2018, the opening of the first-ever national memorial to the victims of lynching occurred at a time when Confederate monuments became such a topic of debate in America. Created by the Equal Justice Initiative and designed by the Boston-based firm MASS Design Group, The National Memorial for Peace and Justice will surely be an educational, if not harrowing, experience for every visitor. At the beginning of the memorial, patrons walk alongside dark red columns (which include both the names of victims and the counties where these unthinkable events took place). Located on the site of a former warehouse where black people were enslaved in Montgomery, Alabama, this narrative museum uses interactive media, sculpture, videography and exhibits to immerse visitors in the sights and sounds of the domestic slave trade, racial terrorism and the world’s largest prison system.

The building, which combines dedicated senior-housing facilities with a broad mixed-use program and a lush green roof, was selected from a strikingly broad shortlist that included works from offices such as Sanjay Puri Architects, Koffi & Diabate Architectes, Heatherwick Studio, Spheron Architects, and INNOCAD. Kampung Admiralty (Kampung meaning “Village” in Malay) is the first development in Singapore to fully integrate housing for the elderly and hence Singapore’s flagship “vertical village” which has transformed a compact 2.2 acres site into a dynamic community heart. Ramboll (Ramboll Studio Dreiseitl) is responsible for design of the greenery and landscape, which includes a tropical rainforest, as well as water management systems.

The landscape is designed as layers of green and blue infrastructure woven into the building to connect residents and the greater Admiralty neighborhood to the historical “Kampung” village spirit within today’s highly densified urban context.