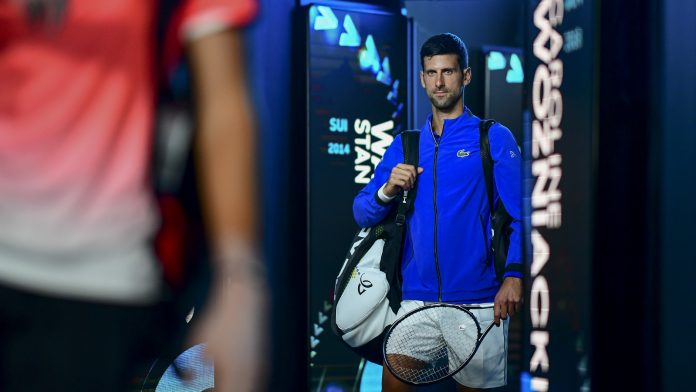 World No.1 Novak Djokovic produced a defiant performance to down a dogged Daniil Medvedev and advance to the Australian Open 2019 quarterfinals, moving one step closer to a record seventh title at Melbourne Park with a 6-4 6-7(5) 6-2 6-3 victory.

Djokovic will face Kei Nishikori in his 10th Australian Open quarterfinal, having now reached the last eight at least 10 times at all four majors after a contest peppered with scintillating rallies, a dramatic slip from the Serb, taped shoes, treatment and a code violation for Medvedev.

By the end, both players have been brought to their knees during an attritional contest that featured more errors than winners – a combined 99 and 81 respectively, split almost evenly.

Djokovic returns to the last eight at Melbourne Park for the first time since 2016, having exited to Denis Istomin in the second round in 2017, and Hyeon Chung in the fourth round last January.

“Since my next opponent is watching, I feel fantastic – I’ve never felt fresher in my life,” Djokovic joked after the match, flexing his biceps and puffing his chest before admitting, “It was a physical battle.

“I didn’t feel so great in the last 20 minutes of the match or so. We’ll see tomorrow how the body reacts, but I’m confident I can recover, and I can be ready for next one.

“Even though it was three sets to one, it seems like a five-set match, really. It was draining physically, because you just could not rely on one-two punch tactics so often. It was a cat-and-a-mouse game for most of the match, that’s why it was so lengthy. We had rallies of 40, 45 exchanges.

“Daniil has been playing some great tennis this past six months. It was difficult to go through him, so I had to find a different way. These kinds of matches, you have to hang in there and wait for the opportunities.”

While dictating most of the action, Djokovic was prevented from running away with the match as Medvedev red-lined his game in a bid to become the first Russian to reach the last eight since Nikolay Davydenko’s 2010 campaign.

The upshot was a highly entertaining first two sets of rich quality at Rod Laver Arena, Medvedev using every trick and flick at his disposal to stay with the Serb, whose fitness and feather touch proved pivotal when it mattered.

Serves from the tramlines, changes of pace, forays to the net and interminable rallies – Djokovic weathered them all to claim the first at the second time of asking, breaking back after being denied the chance to serve out the set.

The top seed almost rode that momentum to an early break in the second, seeing five chances come and go in a 20-point second game. There was still time for sportsmanship, Djokovic conceding a Medvedev ace that had been called out before the Russian could challenge at deuce, but the break duly followed in his opponent’s next service game.

The tenor of the contest turned when Djokovic missed out on the chance to move 5-1 up. Instead, Medvedev broke back in the next game and clung on to reach the tiebreak, levelling up on his fourth set point.

There was a scare for Djokovic early in the third when he fell awkwardly while lunging to reach a Medvedev pass. The top seed was unhurt, but quickly found himself 0-40 down, only to open his shoulders and hammer his way back to parity at 2-2.

“I was fortunate to save a couple of break points – that was a crucial hold,” Djokovic admitted. He didn’t lose another game in the set.

Deflated by missing out on his first meaningful lead of the match, fatigue seemed to floor Medvedev as the third hour of the match wore on. Djokovic broke twice as the Russian relied on his wits as he wilted, disappearing for a comfort break before the start of the fourth.

On his return, Medvedev found a second wind for the fourth set, bringing up break points in the second and sixth games as Djokovic, struggling for rhythm and spraying errors as his back stiffened, dug in to protect the break he had snatched for a 3-1 lead.

Opportunities lost, the Russian slumped to 0-40 when serving to stay in the match as Djokovic sealed victory on his third match point, ending three hours and 15 minutes of gruelling tennis. Djokovic’s only consolation: Nishikori’s five-set battle with Pablo Carreno Busta broke the five-hour barrier at Margaret Court Arena.

“Hopefully we’ll both be fit for that one,” Djokovic said of the upcoming quarterfinal.

“Kei won another marathon match – congratulations to him for fighting back from two sets to love down and a break down. He’s a fighter, he’s a very talented player – one of the quickest players on the tour, hard worker. I have lots of respect for him.

“Every match that you play against each other is different, so I expect him obviously to come out, to try something new. Yeah, I expect a tough one.”

WHISPERS OFFERS A WINDOW TO THE HOME OF ROLLS-ROYCE