Dolce & Gabbana latest fashion show can be summed up in just a few words – a breath-taking extravaganza.

The inspiration behind Dolce & Gabbana’s latest collection was The Betrothed (I Promessi Sposi), a 19th century novel by Alessandro Manzoni, considered to have established the foundations of modern Italian literature. The Betrothed is set in Lake Como, where two lovers are separated by nuns and thugs.

Dolce & Gabbana’s latest Alta Moda presentation took place in Lake Como’s Teresio Olivelli botanical park and paid a beautiful tribute not only to the novel, but also to the dramatic scenery of this one-of-a-kind location.

Lady Kitty Spencer, the niece of the late Princess Diana, opened the show in a voluminous 18th-century-inspired skirt and corset top, emblazoned with extracts and imagines from I Promessi Sposi.

There were numerous other familiar faces among the models walking the runway for this Dolce & Gabbana show, including Helena Christensen and Ashley Graham. But by far, Naomi Campell, in her decadent gown, featuring stunning feathered headdress, caught everyone’s attention as she walked through the amazing  it was Campbell’s decadent gown, stunning feathered headdress, and elegant accompanying soundtrack which drew everyone’s attention to her as she walked through the alley.

The show featured a total of 120 models, that gathered for a final photo on the steps of the villa in the most picture-perfect moment.

The Alta Moda presentation is part of a four-day extravaganza set in some of Italy’s most picturesque surroundings, where top clients and a handful of international press are invited to fully immerse themselves in the Dolce & Gabbana universe. In addition to getting the firt look on the brand’s Alta Moda, Alta Sartoria (menswear) and Alta Gioielleria (high jewellery) collections, attendees are treated to such delights as a dedicated pop-up shop on-board a boat, dinner on the grounds of a church in Bellagio and entertainment courtesy of Tinie Tempah. 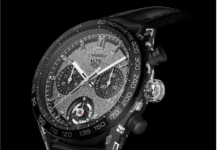 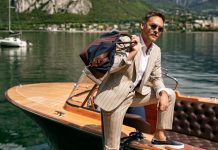 Răzvan Simion: “My style: a mix of Sprezzatura, in Chopin night tones, with Traviata accents!”