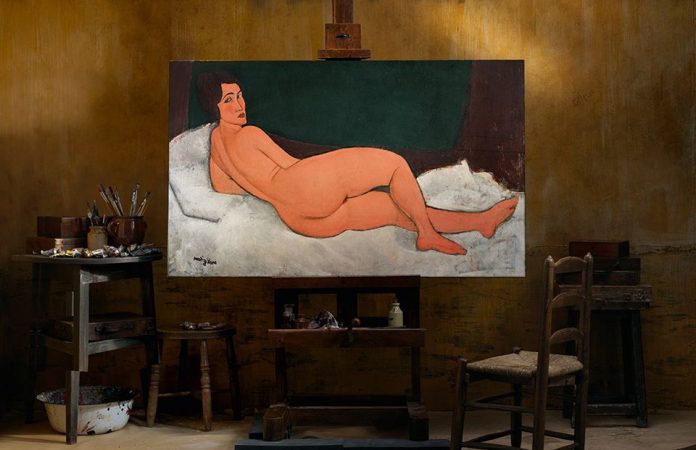 Amedeo Modigliani’s 1917 painting Nu couché (sur le côté gauche) sold tonight at Sotheby’s in New York for $157.2 million, becoming the most valuable work ever sold at the auction house. The work, a portrait of a nude model peering back over her shoulder at a viewer looking in from behind, caused a stir when it was first shown in Paris in 1917 and  even led to the police closing the exhibition.

The auction record for Modigliani, which some expected to fall tonight, was set in 2015, when Nu couché(1917–18) sold for $170.4 million—above its $100 million estimate—at Christie’s in New York, making it then the second-highest price ever for a work sold at auction. That painting was purchased by the Chinese collector Liu Yiqian.

Tonight auctioneer Helena Newman started bidding for Nu couché (sur le côté gauche) at $125 million and slowly counted up, with a palpable quietude in the room. The first, and winning, bid came in from a bidder on the phone with Simon Shaw, Sotheby’s co-head of Impressionist and Modern art worldwide.

The Modigliani canvas is part of a prized series of nude paintings, produced between 1916 and 1919, that caused a scandal when they were first shown in Paris. When exhibited in  Berthe Weill’s gallery for what would be the only one-man exhibition that Modigliani during his lifetime, a sizable crowd outside raised the curiosity of the police, who shut down the show after two days.

In the run-up to tonight’s sale, Sotheby’s positioned the painting as part of a paradigmatic shift in art history. In a statement about Nu couché (sur le côté gauche) and other works of its kind, Simon Shaw, the co-head worldwide of Sotheby’s Impressionist and modern art department, said, “Together these pictures signal a watershed in perhaps the greatest tradition in art—there is the nude before Modigliani, and there is the nude after Modigliani.”