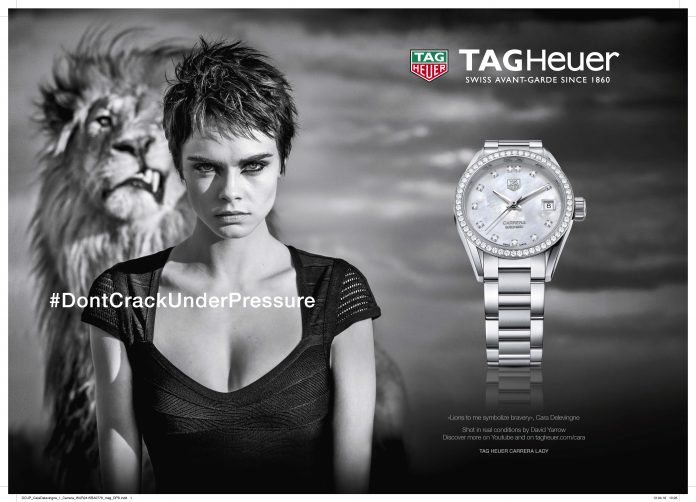 Cara Delevingne puts her distinctive spin on the TAG Heuer “Don’t Crack Under Pressure” campaign, shot by David Yarrow. The actress and model designed the campaign in her image.

In the presence of lions, Cara demonstrates her strength and humility. She conveys power and fragility, her passion for the king of beasts evident. The image was shot in South Africa by David Yarrow, the illustrious fine art photographer who specializes in capturing the beauty of endangered animals.

This campaign carries a message of respect, support and strength towards animals. TAG Heuer has created an intense campaign, fearless, feminine and contemporary.
TAG Heuer is delighted to be able to unveil its new advertising campaign, starring the sublime Cara Delevingne. It shows Cara, full of confidence, her gaze piercing, with her back against a lion. This unique and disruptive visual, created without any special effects, catches the eye, just like the Swiss watchmaker. 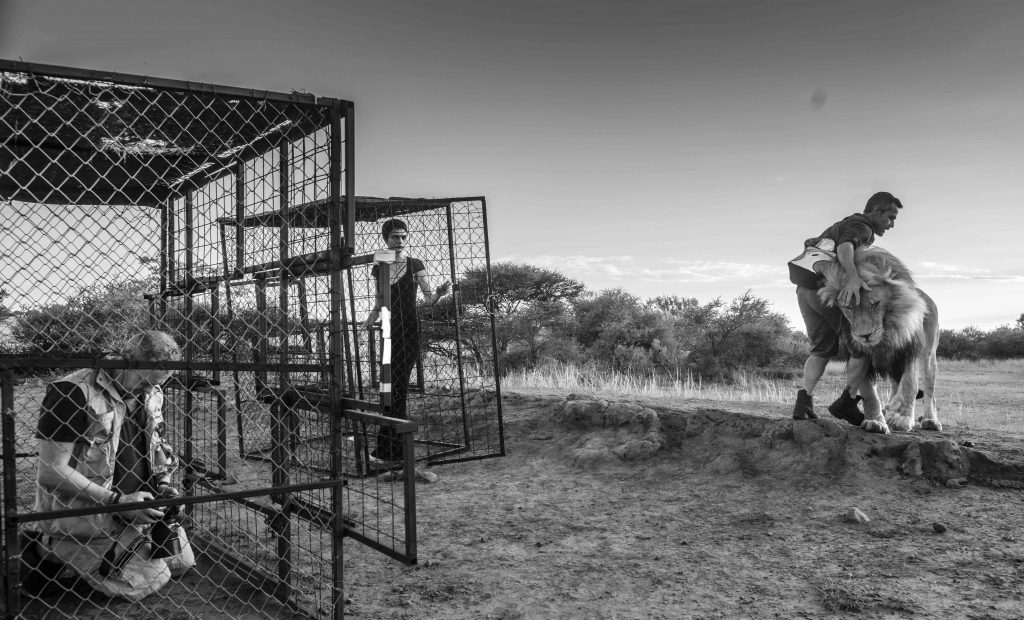 “I am delighted with the result of this new campaign. It shows Cara as powerful,
courageous, audacious, and commanding of respect. Through her, I can see TAG Heuer
reconnecting not just with the millennial and younger generations, but also with the brand’s AvantGarde
spirit, the spirit which pushes us to do things differently, to innovate, to take risks. It is a
new interpretation of Don’t Crack Under Pressure which, I hope, will inspire the youth of today.”

Cara Delevingne added: “It has long been a dream of mine to get the chance to work with wild animals, and particularly with a lion! I am so grateful to collaborate with TAG Heuer on this campaign.”

In the image, Cara Delevingne is faced with the magnificence of the king of beasts who
symbolizes courage, and strength. She has a lion tattooed on her index finger, inspiring her and guiding her choices and actions. 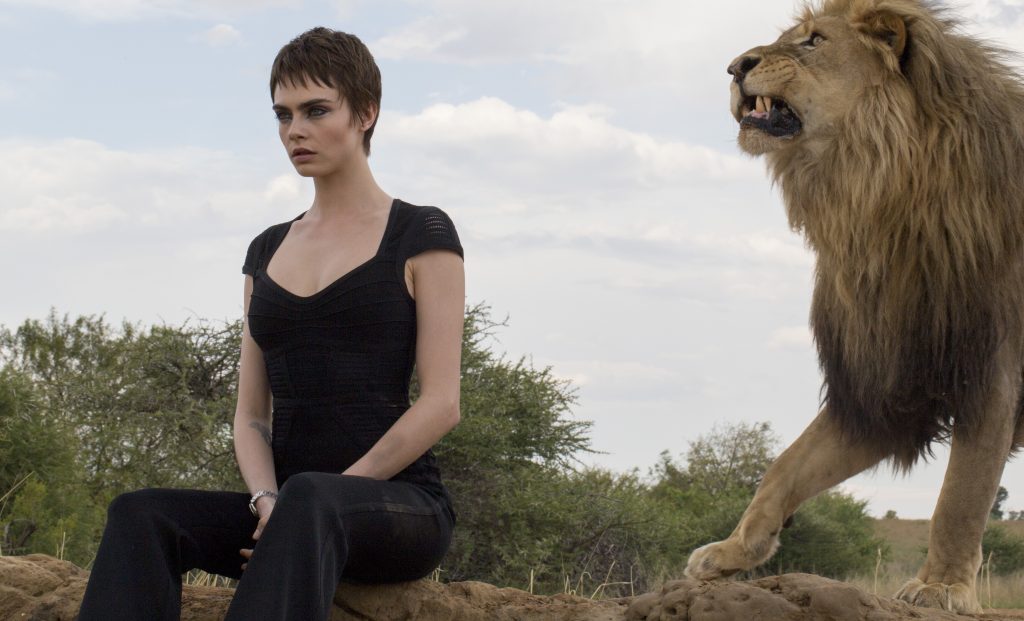 The moment was captured by fine art photographer David Yarrow, one of the most respected wildlife photographers in the world. His works are immediately recognizable through their unique point of view, which makes viewers feel intimately close to the animal.

Visual contact is almost always present in his work, and this is also how he wanted to capture Cara’s gaze. “When I photograph an animal, the first thing I do is look into its eyes. If they are not piercing, then it’s very difficult to capture the animal’s soul. And Cara has a truly piercing gaze! I therefore knew right away that the look would be at the very heart of this project!” explained David. He is able to capture the supreme beauty of living creatures, and each of his images truly honors them. His photographs can be seen in some of the world’s most prestigious museums and exhibitions. Highly sought-after, they sell for up to $60,000 per print. 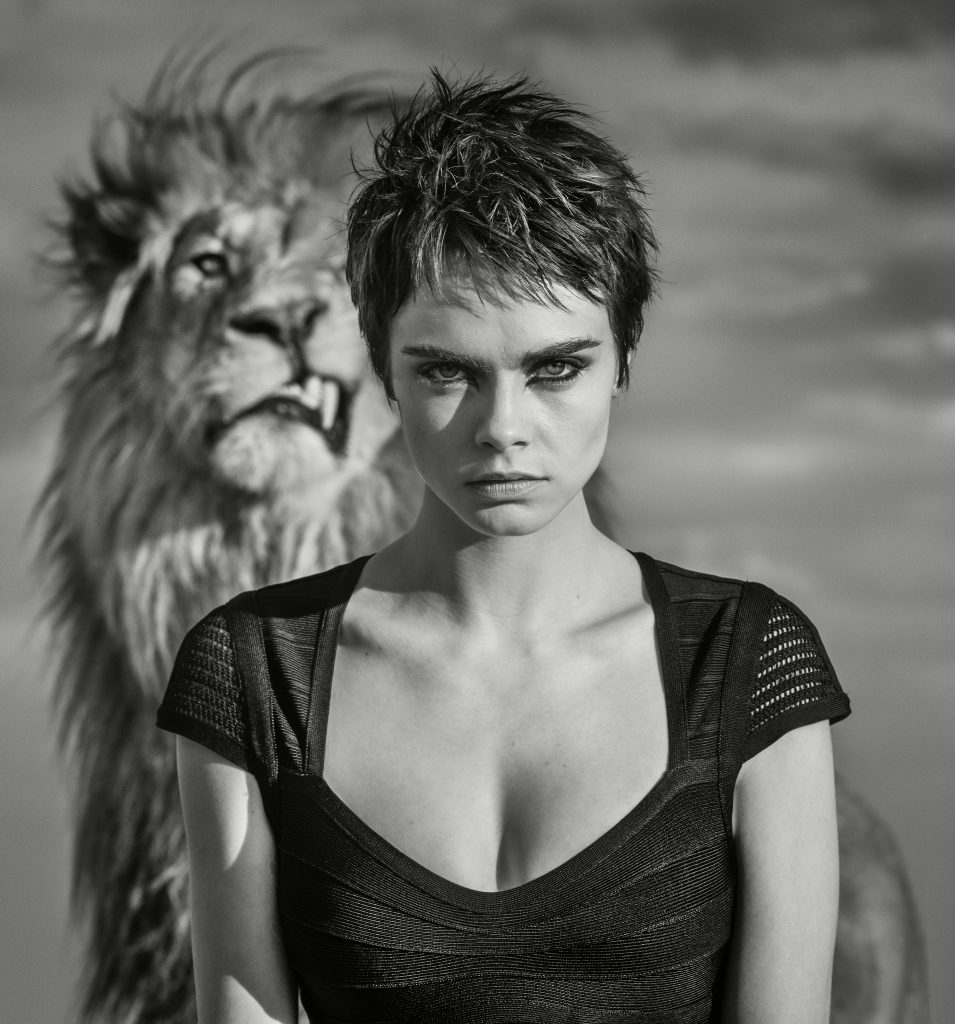 With this new visual, TAG Heuer signs an intense, fearless and feminine campaign, just like the amazing Cara, which demonstrates once again the disruptive and avant-garde spirit of the Swiss watch brand.