The “Poetry of Time” concept of Van Cleef & Arpels is consistently practiced, resulting in a variety of timepieces that go from the quartz powered Sweet Alhambra to those fascinating secret watches. The one creation we cannot exclude from the write-up, however, is the Lady Arpels Planétarium: the smaller, ladies’ version of the Midnight Planétarium watch of 2014.

This is a 38 mm white gold watch with diamonds all around the bezel. Circular rings of glittering, deep blue aventurine set the stage for the most central planets of the solar system. The sun is depicted in pink gold at the epicentre with mercury in pink mother-of-pearl, venus in green enamel and the earth in turquoise. These tiny representations take as many days as the respective planets do in real life to complete one orbit around the sun.

Although the farther planets are not included due to the smaller size of the watch, the added bonus here is the diamond moon which dances around the sun in a realistic fashion, thereby serving to indicate the phases of the moon. And lest we forget, this is a watch after all so it must tell time. That task is trusted to the shooting star which circles the outer perimeter where the hour numerals and the interim dots combine to give the most accurate approximation possible.

While the gender balance is not and will never be precisely at the centre at Van Cleef & Arpels, it is a pleasure still to see that they do not forego gentlemen’s watches completely. For SIHH 2018, the thoughtful maison has presented, for gentlemen, the Midnight Heure d’Ici & Heure d’Ailleurs in a 42 mm, satin-finished pink gold case. The model name can be loosely translated as “the time here, the time elsewhere. That is the reason why there are two opposing windows to indicate the hour in different time zones. One retrograde hand traces along the scale from 0 to 60 in order to tell the minute, shared by both cities.

At the beginning of a new cycle, the hand resets to the starting position in the simultaneous fashion as the jumping of the hour to the new numerals. The self-winding movement used is developed exclusively for Van Cleef & Arpels by the Geneva-based specialist Agenhor – it can be admired through the sapphire crystal caseback.

If you feel you have seen this watch before, that is because it is not a brand new creation. Its predecessor was introduced at SIHH 2014 as the Pierre Arpels Heure d’Ici & Heure d’Ailleurs watch in white gold with white lacquer dial. Then as now, the timepiece is a part of the permanent collection and intended for gentlemen with regular need to travel, presumably for business, or those whose heart is intrinsically linked to someone in a faraway country. 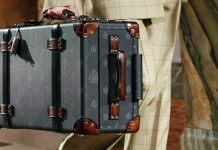 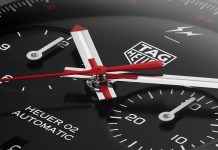 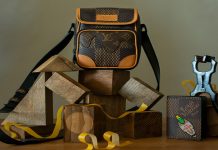 Rediscovering the glamour of rail travel